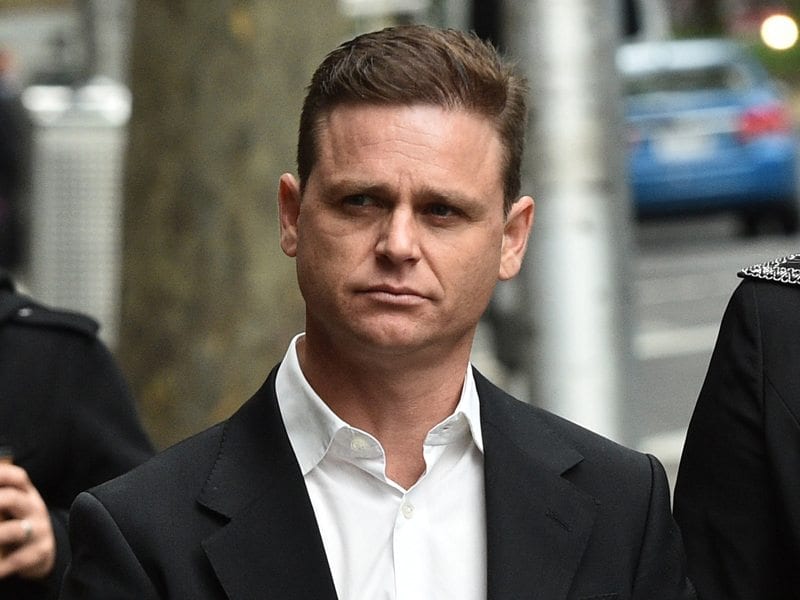 The court of appeal has upheld controversial jockey Danny Nikolic’s ban from racecourses.

At the peak of his career, jockey Danny Nikolic rode the winner of one of the nation’s richest thoroughbred races to victory.

Now he’s not allowed to set foot on Victorian racetracks.

The Court of Appeal on Friday upheld the Victorian Police Chief Commissioner’s challenge to a decision that overturned an order banning the former Caulfield Cup winner from entering specified racetracks.

The order, signed on November 12, 2015, was made to protect the integrity of the Victorian racing industry and its participants.

Deputy Commissioner Shane Patton wrote to the controversial jockey in October 2015 advising him the ban was being considered in light of Nikolic’s “violent behaviour” and other undisclosed information.

He had formed the view, he wrote, that Nikolic had a limited ability to control his behaviour towards others, including racing officials, participants, family members and the public.

Nikolic was disqualified from racing for two years after being found guilty of threatening chief steward Terry Bailey in 2012.

He incurred a further penalty for offensive conduct towards another steward during an appeal against the two-year ban.

“This behaviour, which occurred both in and out of the context of racing, demonstrates a propensity for engaging in acts of violence and intimidation,” the Deputy Commissioner wrote.

He also cited “other credible, protected information which, for reasons of public interest, I cannot disclose to you.”

Nikolic sought a judicial review saying he was not provided with the details of adverse allegations against him.

He said he had been denied procedural fairness and argued he should have been adequately informed of the matters the chief commissioner would take into account when deciding whether or not to make an exclusion order.

Victorian Supreme Court Judge Tim Ginnane agreed certain documents should have been disclosed to Nikolic and set aside the exclusion order in June 2016.

The commissioner appealed the decision and on Friday, the Court of Appeal found in his favour, ruling the non-disclosure of certain information did not breach procedural fairness.

The court said the key issue was whether adverse information could be disclosed to Nikolic without unreasonably prejudicing confidential police sources, investigations or investigative methods.

It found disclosure was not necessary.

The decision of the court means the exclusion order remains in effect.

He spent five days at the Victorian Civil and Administrative Tribunal last week pleading his case to have a separate ban imposed on him by racing stewards overturned.