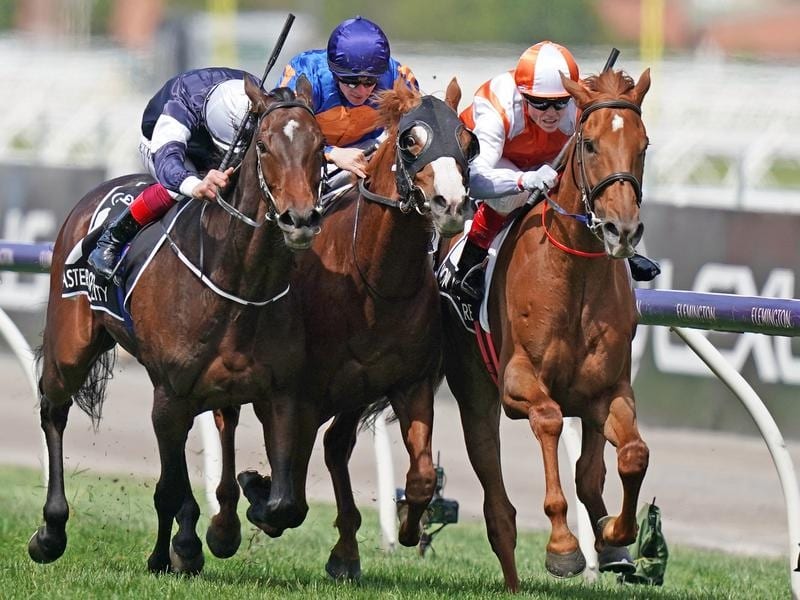 Melbourne Cup winner Vow And Declare (r) will be aimed at a $1.5m race in Brisbane, the EVA Air Q22.

The final day of the Brisbane winter carnival will have three million dollar events after the announcement of a $1.5 million weight-for-age race.

Plans for the new 2200m-race, to be called the EVA Air Q22, were unveiled on Tuesday with trainer Danny O’Brien signalling it would be a target for Melbourne Cup winner Vow And Declare as part of his winter preparation.

Vow And Declare spent last winter in Queensland, running second in the Derby before winning the Tatt’s Cup.

The Brisbane Cup on the same day will revert to 3200m, the same distance as the Melbourne Cup, after a decade at 2400m.

The Oaks will remain at 2200m after it was run at that distance rather than the traditional 2400m last winter.

The Brisbane Racing Club hopes the Q22 will attract horses from the Oaks and Derby.

Several races will have ballot-free exemptions into the EVA Air Q22.

BRC chief executive, Tony Partridge, said the return to three days at Eagle Farm was a boost for the entire industry.

“Eagle Farm has more than 150 years history and its return to the centre of the carnival provides us with the chance to watch some of the nation’s best horses compete on one of Australia’s most testing tracks,” Partridge said