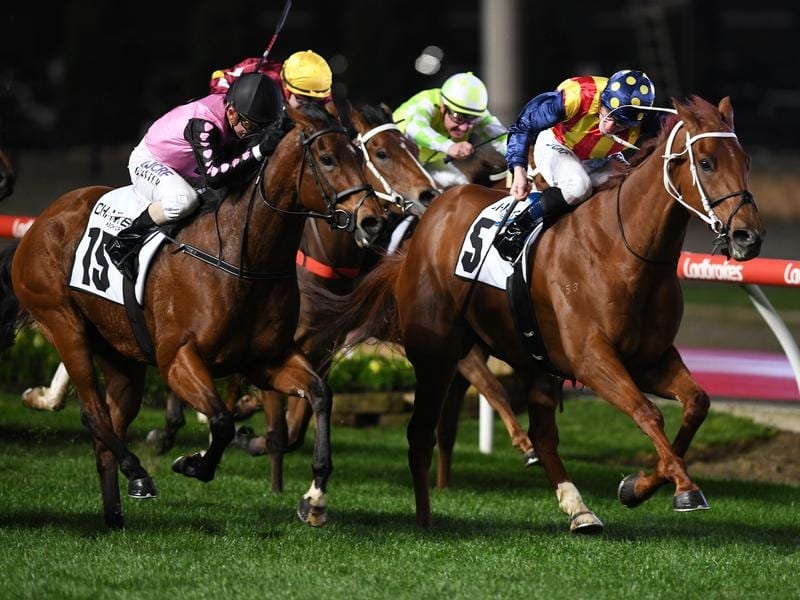 Nature Strip (right) has won the Group One Moir Stakes at The Valley.

Nature Strip has bounced back from his last-start failure with a performance of sustained speed to win the Group One Moir Stakes at The Valley and press his claims for a spot in the $14 million Everest.

Coming off a fourth placing in the Concorde Stakes when he over-raced, Nature Strip began well from the inside barrier in Friday night’s 1000m-dash and was able to hold the inside advantage under James McDonald to eventually lead.

The track record holder over the course and distance from last year’s McEwen Stakes, Nature Strip kicked strongly around the turn and was able to hold off a gallant Miss Leonidas by a short neck.

Sydney’s premier trainer Chris Waller quipped the Group One win might “stop all the knockers”.

“We seem to get more criticism with him than we ever got with another certain horse (Winx) that was probably our last Group One winner here.

“That’s racing, everyone has got their opinions. He’s a good horse.

“He’s ridden well and today he just stepped away well. James didn’t panic he just got there gradually and it was a good race.

“You think punters get frustrated, well owning a horse and training a horse when you’re running in these types of races, it’s a bitter pill to take when you don’t quite get it right.

“So I think it’s a good reward to everybody and I hope the punters had something on as well and got a bit back from last start when apparently I did everything wrong.”

Waller hopes Nature Strip secures a spot in the $14 million Everest (1200m) at Randwick on October 19.

“I’d say we’ll just see what unfolds in the next few days. If he doesn’t get an invite for The Everest I guess the Schillaci Stakes is the logical choice.”

The winner of the Schillaci at Caulfield on October 12 will be offered the Melbourne Racing Club’s Everest slot.

McEvoy said he would run Sunlight in Saturday week’s Gilgai Stakes at Flemington, two weeks before The Everest at Randwik.

“The risk was the 1000 metres tonight and that’s all that’s cost her the race.”