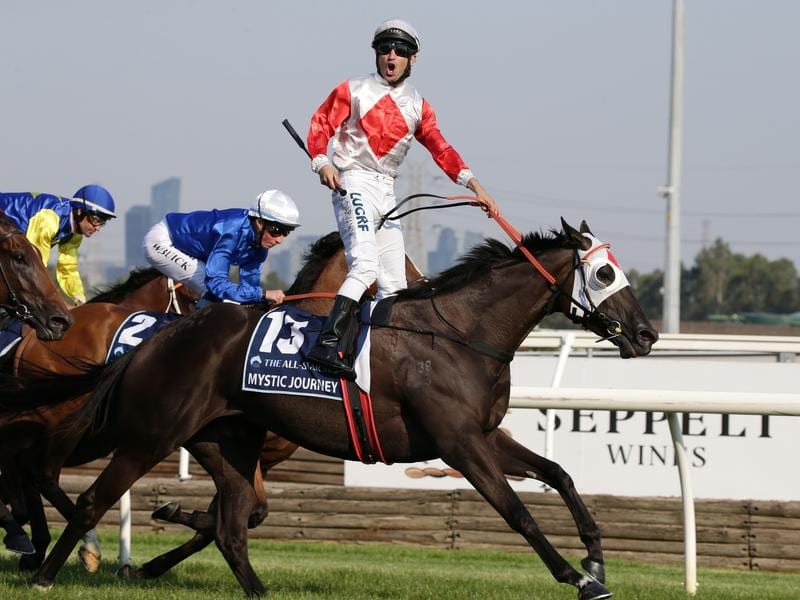 Cox Plate favourite Mystic Journey is ready to run in a barrier trial at Devenport.

Star filly Mystic Journey will take another step towards her race return when she runs in a barrier trial at Devonport in Tasmania.

The Adam Trinder-trained filly is entered for an 800m-trial on the synthetic track on Tuesday as a stepping stone towards her scheduled return in the Group Three Bletchingly Stakes (1200m) at Caulfield later this month.

Mystic Journey stamped herself as a rising star of the Australian turf during her unbeaten autumn preparation, highlighted by wins in the Group One Australian Guineas at Flemington on March 2 and the inaugural $5 million All-Star Mile two weeks later at the same track.

The rising four-year-old is the current favourite for the $5 million Group One Cox Plate (2040m) at The Valley in October.

For the first time in five years the Cox Plate will be run without four-time winner Winx after the champion’s retirement following this year’s autumn carnival in Sydney.

In a video post on Twitter on Monday, Trinder said Mystic Journey would be having a day out and a “nice, quiet trial” on Tuesday.

“She will jump from the outside barrier there just to keep her somewhat protected,” Trinder said.

“(She is) not out there to win the trial by any means. She will just float around and just quicken off softly late.”

He said all going well he hoped to kick off Mystic Journey’s campaign in the weight-for-age Bletchingly on July 27 but that would be weather and ground dependent.

“If the ground is wet she won’t take her opportunity there,” he said.

“But she is progressing along really well through the preparation and had no hiccups so far.

“She’s really bright and healthy about herself, so we’re getting close to heading back to the races for a preparation which hopefully will culminate in the Cox Plate. “