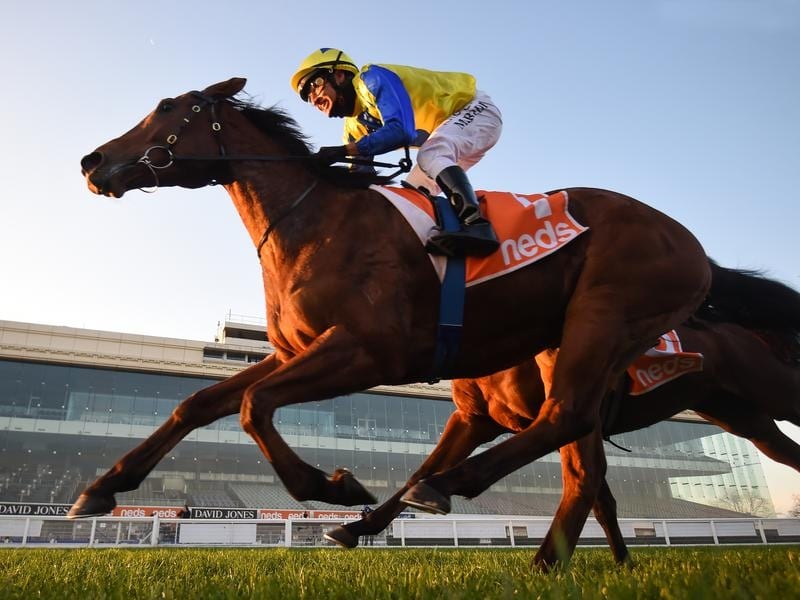 Michael Rodd guides Mystery Shot to a fifth successive victory at Caulfield to earn a spell.

Warrnambool-trained gelding Mystery Shot has earned himself a break after landing his fifth win on end with a tough on-pace performance at Caulfield.

Mystery Shot took out Saturday’s Neds Bet Back Handicap on Saturday to follow successive Caulfield victories after country wins to open his career at Warrnambool and Ballarat.

Ridden by Michael Rodd, Mystery Shot was sent off the $1.65 favourite in defeating Wicklow Town ($11) by a neck with Savvy Lad ($21) three-quarters of a length away third.

Trainer Lindsay Smith admitted to some nervous moments during Saturday’s race after Damien Oliver, riding Wicklow Town, made a mid-race move to take up the lead.

But Rodd did not allow Wicklow Town to cross to the fence, joining the leader turning for home with the pair staging a two-horse was up the Caulfield straight.

“I was doing a bit of twitching on the turn and thought this is not going to be as easy as last time,” Smith said.

“It’s good to win five in a row and I’ll speak to the team, but I’m thinking he’ll go and see a bit of green grass.”

Smith said he would like to aim Mystery Shot at the Group One Sir Rupert Clarke Stakes at Caulfield in September but added the gelding, who turns four next Saturday, still had some maturing to do.

“I keep thinking about the Sir Rupert Clarke, but I’d be going to the well a bit too much and it’s a little bit too far away,” Smith said.

“I won’t be greedy and savour the five and let him have a rest.”