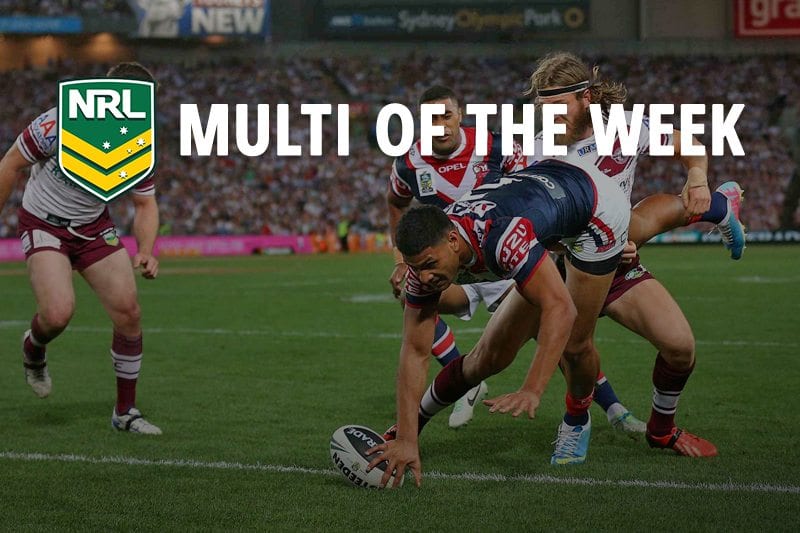 WE had two contrasting weekends of footy across the big footy codes in the opening week of the finals after the NRL put on several heart-stopping games while the AFL handed up three fizzers.

The Eels proved they could be a genuine premiership threat when they took the Storm down to the line, the Panthers shocked the Sea Eagles, while in the AFL West Coast overcame Port to extra time in an elimination final epic three days after GWS were hammered by Adelaide in a Thursday night snorefest.

Enough about the past though, let’s look to the future, and in this week’s multi we are casting aside the petty cross-code rivalries and piecing together a multi that includes AFL and NRL games.

Multi selections for the semi-final week of the AFL and NRL finals:

The first match of our cross-code finals multi sees the surging Swans facing off against the Cats at the MCG.

The Swans were fantastic last week, dispatching Essendon in consummate ease. Although the Swans will have to do it the hard way this year if they are to win the flag the manner in which they hammered the Bombers was indicative of a team that knows it has what it takes to win it all.

The Cats last week were gallant for three quarters and dismal for the last against a red-hot Richmond. The Cats were thumped in the last quarter, which gave the ominous vibe that a straight-sets exit from the 2017 finals series could be in store for Chris Scott’s men.

Geelong need to turn their form around and fast. Unfortunately they come up against possibly the best team in the competition right now who also have an imposing three match winning streak against them, all of which came in Victoria.

We expect the Sydney juggernaut to roll on at Geelong’s expense.

The Broncos and the Panthers lock horns in the second leg of our footy finals multi this week and we are favouring the home side to continue their spectacular run against Penrith intact.

Brisbane has won four of its last five matches against the Panthers at Suncorp Stadium and will take great confidence into the match after only narrowly going down to the Roosters the week before.

The Panthers bring in terrific form however, after easily accounting for Manly on Saturday night. Could Penrith be the dark horse of the finals? We are not so sure.

While the win against Manly was impressive, knocking off the Broncos in Brisbane is a much tougher prospect, and we think it may be beyond them.

We are backing the home side to keep our multi rolling into the third leg.

The GWS Giants and the West Coast Eagles take us into Saturday night as one club searches for answers after a horrible showing while the other will attempt to ride that wave of euphoria deep into the finals.

The Giants were atrocious last week against the Crows and were not prepared to put in the hard yards required to win. The club surely will have spoken internally about the need to toughen up and we should see an improved performance on Saturday.

The Eagles were sparkling in their extra-time win over the Power. At several stages late in the match it looked like West Coast were beaten but they found a way to fight and remain in the contest.

Will that tough win come at a cost though?

We think the additional game-minutes, the travel and the wear-and-tear the Eagles veterans have had to endure will take its toll on Saturday night and we anticipate Giant thrashing at the hands of the GWS in the second semi-final.

Two of the more impressive performers of the opening finals week meet on Saturday night as the Eels host the Cowboys in Sydney.

Few gave the Eels a chance of knocking over the rampaging Storm but they nearly did exactly that last Friday night at AAMI Park. Many would point to some favourable calls from the refs going the Storm’s way, but Parramatta showed they are capable of matching it with the very best.

Comparatively Cronulla were meant to steamroll over the injury-hit Cowboys en route to the second week of the finals, but after conceding a try in opening three minutes North Queensland surged back and sunk the Sharks in impressive fashion.

Can lightning strike twice for the Cowboys? We do not think so.

We are backing Parra to do the business and generate a winning dividend for us on Saturday night.

Promotions for week two of the AFL and NRL Finals

The wise heads at Crownbet.com.au cottoned on quickly that there is only two games per code this weekend and decided to combine them for us. Place a four legged multi across the footy finals this week on the AFL and NRL and you will get your stake back up to $50 in bonus bets if one leg fails.

Sportsbet.com.au is offering their terrific AFL and NRL Same Game Multi insurance deal on all matches this weekend that will see your stake returned up to $50 in bonuses if only one leg fails out of three or more.

Sportsbet’s early payout deal continues for the AFL and NRL semi-finals, with head-to-head bets paid as wins once your team leads by 12 points or more in the league and 24 or above in the Aussie rules.

Ladbrokes has footy specials running for every game of the weekend, so check the website daily for the latest info on bonuses and promotions.