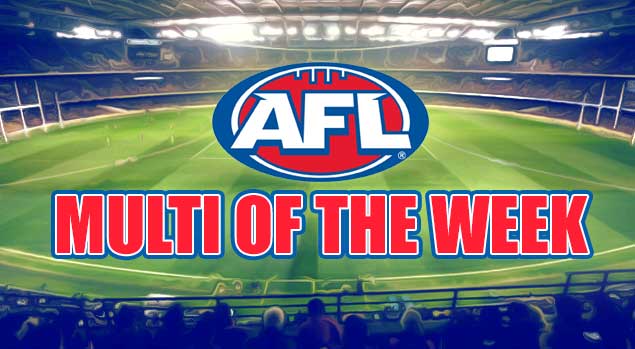 GET ready to kiss your spare time goodbye footy fans, the AFL is finally back.

The season kicked off on Thursday as the Tigers trounced the Blues in the traditional season opener, and there is a number of fascinating matches to follow.

The Demons are looking to break two key hoodoos on Saturday against the Saints, the Bombers welcome back their suspended players for a huge match against the Hawks at the MCG and a pair of pre-season premiership fancies in Adelaide and GWS meet on Sunday.

All odds for the one week of the AFL Season were provided by Crownbet.com.au.

Selections for the AFL Round 1 multi:

GWS Giants to win against the Adelaide Crows ($1.60)

A match between two of the expected improvers in 2017 kicks off our AFL multi as the Saints host the Demons at Etihad Stadium.

St Kilda is looking to extend a sensational winning run against Melbourne, which has seen them not lose a game against their Saturday opponents since 2006.

Another factor is Melbourne’s inability to win at Etihad Stadium. The Demons have registered just one win at the venue in 25 attempts.

The game looks like it will be won and lost in the Saints’ forward line. Their multi-pronged attack will generate a lot of headaches for opposition this season, especially ones that are light down back like the Dees.

St Kilda should start our multi out in winning style.

It is an all-Queensland affair on Saturday night as the Suns and the Lions lock horns on the Gold Coast.

Despite two back-to-back poor seasons, the Suns are capable of bouncing right back. They have one of the greatest players of the modern-era in Gary Ablett in their line up as well as the best young key forward in Tom Lynch.

The Lions are in rebuild mode. They will be boosted by the fully fit Dayne Beams and Tom Rockliff, but they have numerous holes across the field, including a dependable forward and reliable defenders.

This should be a statement game from the Suns. They should easily account for the Lions in their opening game of for 2017.

The Kangaroos and the Eagles meet in our first Sunday game in round one under the roof at Eithad Stadium.

The Drew Petrie Cup anyone?

West Coast has the much stronger team on paper here, the only issue will be the depleted ruck stocks for the visitors. Former Roo Petrie will carry the load for his new side on debut and will have his hands full against Todd Goldstein.

Will Goldstein’s influence be enough to drag North Melbourne over the line? We do not think so.

The Eagles have a powerful midfield and the two-time Coleman Medallist spearheading their attack. West Coast should keep our mutli rolling into the final game.

First and fifth in the pre-season premiership betting market meet on Sunday as the Crows host the Giants at Adelaide Oval.

GWS is the $4.50 favourites at Sportsbet.com.au to win the 2017 premiership while the Crows are back on the fifth line of betting at the $10 quote.

The Giants have the most talent-laden squads in the league, the only issue for Leon Cameron will be keeping his side relatively injury free and focused for the duration of the season.

The only concerns in the early part of the season is an ankle injury to star on-baller Stephen Coniglio, who will miss at least the opening month of the home and away season.

The Crows have a strong starting 18 but they have issues outside of that. There are question marks over Taylor Walker and Rory Sloane going into round one, which swings the pendulum towards the Giants.

GWS should end our multi in winning fashion.