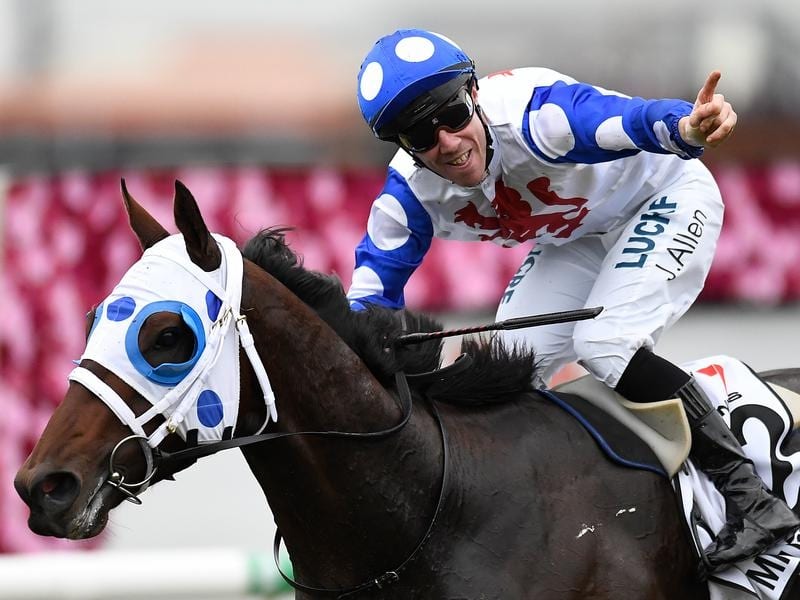 Mr Quickie faces a defining moment with the Turnbull Stakes to determine his next spring target.

The Group One Turnbull Stakes at Flemington looms as a defining race for Queensland Derby winner Mr Quickie.

The Phillip Stokes-trained gelding flashed home for third in his season return in the Group One Makybe Diva Stakes (1600m) at Flemington on September 14 and he steps to 2000m on Saturday.

His performance will to determine whether he heads to the Group One Caulfield Cup over 2400m two weeks later for which he is the current favourite.

The $5 million Cox Plate (2040m) is another spring option for the four-year-old who exceeded Stokes’ expectations with the way he charged home in an eye-catching Makybe Diva Stakes return.

“It was obviously better than expected,” Stokes said.

“He doesn’t show those sorts of things at home. He just does what he has to, but he’s a real race day horse and obviously that gives us a lot of confidence going forward, on what we’ve seen.

Mr Quickie is $8 favourite for the $5 million Caulfield Cup on October 19 in which he has 53kg.

He sits on the fourth line of betting for the Cox Plate, a week after the Caulfield Cup, at $11 and was taken to The Valley eight days ago for a familiarisation gallop.

“There’s Caulfield Cups. Cox Plates. All those things. So we’ll just get Saturday over and done with and we’ll just do it race by race,” Stokes said.

He said he was favouring the Caulfield Cup path under the handicap conditions.

“That’s what my gut feeling is telling me, but until we see it on race day we’ll just let the horse do the talking, so to speak,” he said.

Stokes was happy with the way the gelding worked on Tuesday morning with his race jockey John Allen in the saddle.

“I’m happy with his fitness and he’s looking really well,” the trainer said.

“He worked well again this morning, so everything is good.

“It’s a Group One and they are very hard to win but we’re happy with where we’re at and looking forward to Saturday.”