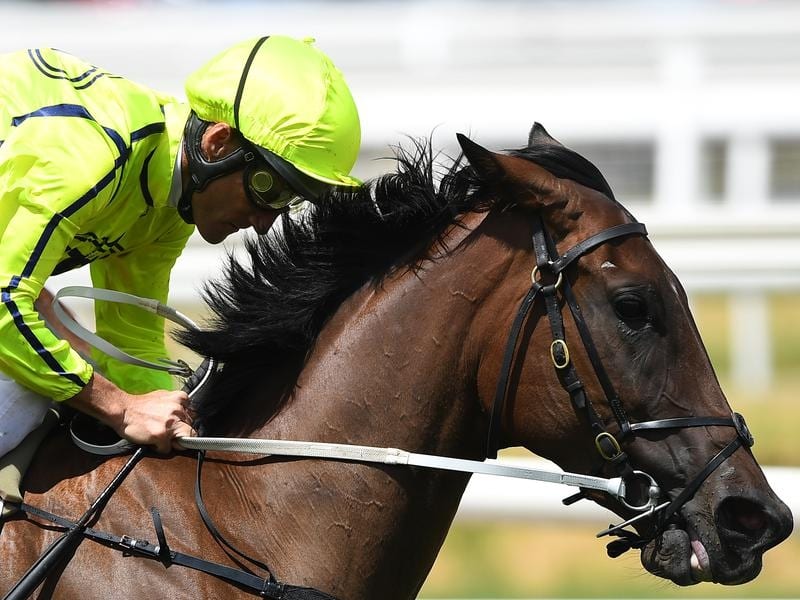 Three-year-old filly Crack The Code will take on older horses in the Sir John Monash Stakes.

Crack The Code will have her first serious examination against older horses in the Sir John Monash Stakes, with co-trainer Michael Kent Jnr believing the Group-winning filly is up for the challenge.

Three-year-old Crack The Code is the youngest horse in Saturday’s weight-for-age Group Three race at Caulfield and it will be the first time the filly, who turns four next month, has been tried in open company.

The majority of Crack The Code’s six starts have been against her own age and sex while she also won a benchmark race for fillies and mares first-up last preparation at The Valley before going on to claim another two races including the Group Three Kevin Hayes Stakes for fillies.

Crack The Code was spelled after being unplaced in the Typhoon Tracy Stakes at the end of her previous preparation in February and Kent Jnr, who joined multiple Group One winning trainer Mick Price in a training partnership in recent months, believes the filly has had a faultless build-up to Saturday’s return and is forward enough to make her presence felt.

“She has had two really good jump-outs. She had a course proper gallop on Tuesday morning with our other runner in Saturday’s race, Princess Of Queens, and she was probably a length and a bit in front on the line and worked better.

“It’s a pretty even race this year so we expect her to be right in the finish, but certainly going to take improvement from the run and end up in those’ mares’ Group races during the spring.”

Crack The Code was at $8 on Thursday in the field of 14 while stablemate Princess Of Queens was $19.

Princess Of Queens, a dual stakes winner who is booked to head to the breeding barn this spring, was unplaced in the Group One Sangster Stakes earlier this campaign and fourth in the Proud Miss Stakes.

She has been freshened since not having the best of luck when eighth in the Golden Topaz at Swan Hill last month.

“I think she would need luck in that race,” Kent Jnr said.

“Princess Of Queens’ form is fairly exposed. Crack The Code has definitely got more upside, I would think.”

The James Cummings-trained Soothing is the $3.90 favourite.