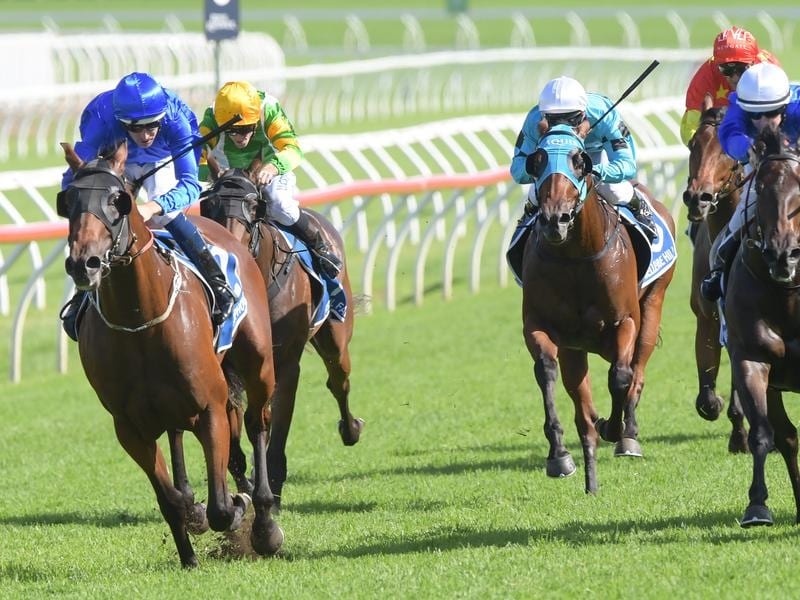 Group One winner Microphone (left) has tuned up for his return with a win in a Flemington jump-put.

Group One-winning colt Microphone has won a jump-out at Flemington as he prepares for his return to the races.

In a heat featuring Caulfield Guineas winner Super Seth on Friday morning, Microphone led most of the way over 800m to beat Highland Beat with Super Seth third.

Microphone was second in last year’s Golden Slipper before winning the Group One Sires’ Produce Stakes.

He was third in the Roman Consul Stakes in his only spring start and connections were satisfied with his work in Friday’s hit-out.

“(Foreman) Reg Fleming was pleased with him. He let down well for Damian Lane and he looks to have pulled up nicely. So the conclusion from the morning is we are happy with where he is at.”

At the same track on Saturday, Cummings’ representatives include eight-year-old gelding Duca Valentinois who resumes from a spell in the Listed Chester Manifold Stakes (1400m) in which he will carry top weight of 60kg.

Lightly raced Bumper Blast is the favourite in the field of eight while Duca Valentinois, the only stakes winner in the field, was at $7 on race eve.

Duca Valentinois runs for the first time since being unplaced in the Wyong Gold Cup in September with his most recent win in Listed grade during last year’s winter carnival in Brisbane.

“I can understand why he would be popular,” Cummings said.

“He had a solid campaign last preparation and he should be nicely fit first-up at seven furlongs with a bit of improvement to come.

“I think he seems to have come back quite well.”

Cummings also has stakes-placed two-year-old colt Jerle resuming in the opening race at Flemington while four-year-old Wagner is favourite to atone in the Furlong Bar Handicap (1100m) after a luckless third at The Valley on December 28.