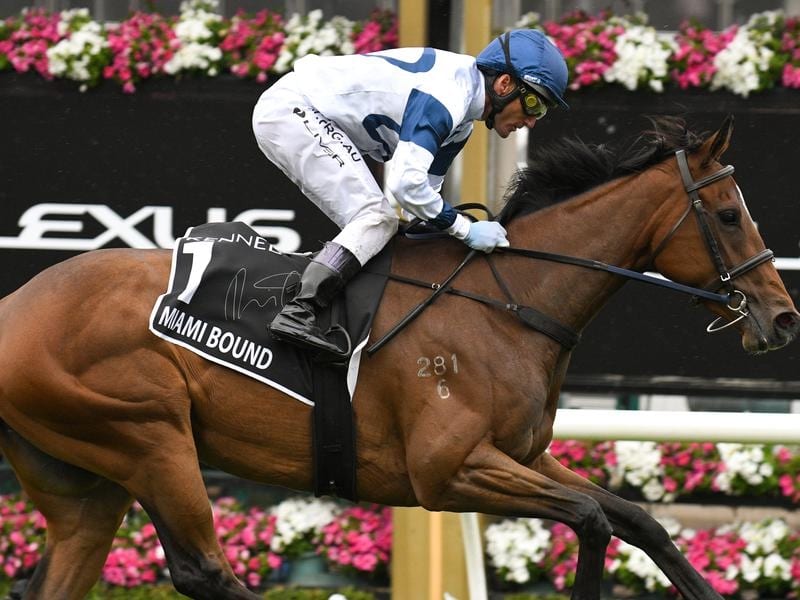 Miami Bound, a stablemate to Melbourne Cup winner Vow And Declare, has taken out the VRC Oaks.

Two days after Vow And Declare put O’Brien on the international racing stage with a maiden Melbourne Cup success, Miami Bound gave the trainer his first win in the VRC Oaks.

Meticulous planning went into preparing Miami Bound for Thursday’s 2500m trip for three-year-old fillies and despite being a betting ring wobbler from $3.20 to $4.20, Miami Bound, under Damien Oliver, showed her staying superiority.

A daughter of 2007 VRC Oaks winner Arapaho Miss, Miami Bound showed she was on target for the Classic after landing the traditional lead-up, last Saturday’s Wakeful Stakes.

She is 37th filly to win complete the double.

“We had been building her all spring to get to 2500 (metres) and we knew once we took the wrapping off her at the 2500 she was really going to let go,” O’Brien said.

“It won’t be her last decent win and every time we run her at this type of distance, she’s going to be very hard to beat.”

Asked if Miami Bound could be a key contender at Flemington in 12 months, O’Brien was cautious.

“The (spring) three-year-old staying form doesn’t ultimately measure up to Caulfield and Melbourne Cups when we’ve got to take on the internationals,” he said.

The Oaks was their win first together at the elite level since that victory.

Miami Bound provided Oliver with the two VRC Classics after riding Warning to win the Victoria Derby on Saturday.

While Oliver’s ride on Warning was perfectly judged, the jockey said his navigation on Miami Bound was not one his best.

“She threw me a bit before the race because she was stopping and not wanting to come back to the barriers,” Oliver said.

“That just rattled me a little bit.

“She’s not normally like that but once I found the back of Vegas Jewel I was pretty comfortable in the run.

“A three-year-old at the distance for the first time left in front, you hope nothing is going to come at you.”