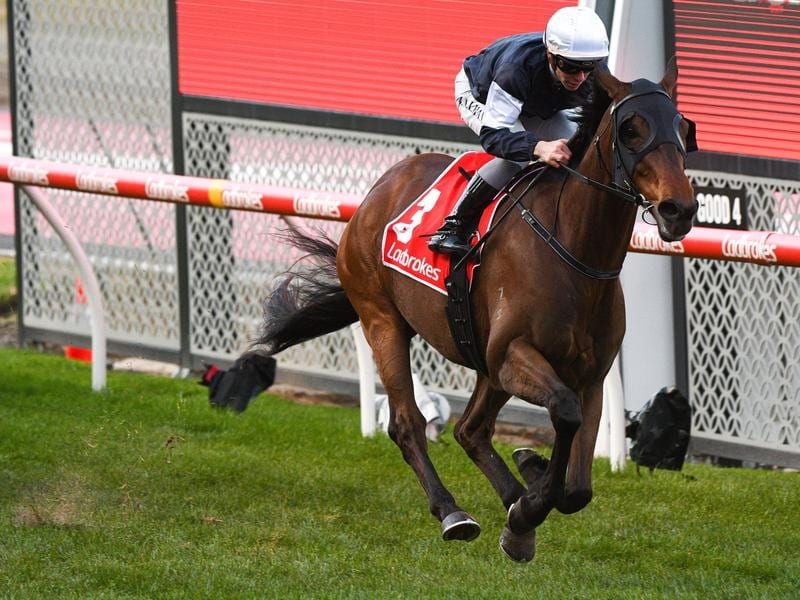 Homesman will try to defend his title in the Group One Underwood Stakes on the way to the Cox Pate.

Having come close to winning the Melbourne and Caulfield Cups in the past couple of years, jockey Ben Melham is even more determined heading towards this year’s major spring carnival features.

Melham rode She Will Reign to win the Golden Slipper in 2017 and had Melbourne Cup glory in his sights that year when he hit the front on Johannes Vermeer at Flemington only for Rekindling to chase him down.

Last year he went agonisingly close to Caulfield Cup victory on the Lloyd Williams-owned Homesman who was second to Best Solution by a half-head.

“It certainly makes you more hungry to be able to go one better,” Melham said.

“I’ve had obviously a second in the Melbourne Cup, second in the Caulfield Cup. So it would be nice to get another big one on the mantelpiece. I’ll certainly be trying hard this year.”

While the import Homesman contested the Caulfield Cup last year, this time another of Melbourne’s big three spring features, the $5 million weight-for-age Cox Plate (2040m) at The Valley on October 26, is his target.

Homesman is on the fourth line of Cox Plate betting and will be out to further enhance his credentials when he and Melham attempt to win Sunday’s Group One Underwood Stakes (1800m) at Caulfield for the second straight year.

Melham was impressed by the way the six-year-old gelding returned this spring with a dominant win in the Group Two Feehan Stakes (1600m) at The Valley on September 7, his first start since the 2018 Caulfield Cup.

“He felt as though he had improved,” Melham said.

“He’s really seasoned up as a horse.

“He’s had a couple of preparations here now and he’s just a good, strong, sturdy horse and he couldn’t have been more impressive the other day.

“I haven’t been on him since but he would have improved since that run and that would see him be hard to beat on Sunday.”

Homesman has the outside barrier in the Underwood but is the $2.80 favourite, with Makybe Diva Stakes winner Gatting and veteran Hartnell the only other runners under double figures at $4.80.

“I suppose the draw is a little bit of a concern,” Melham said.

“There’s two leaders inside him and a bunch of them that want to be just behind the speed.

“So I’m just unsure where he’ll fit in yet – how I’ll ride him – but certainly a repeat performance of his run in the Feehan would see him very hard to beat.”