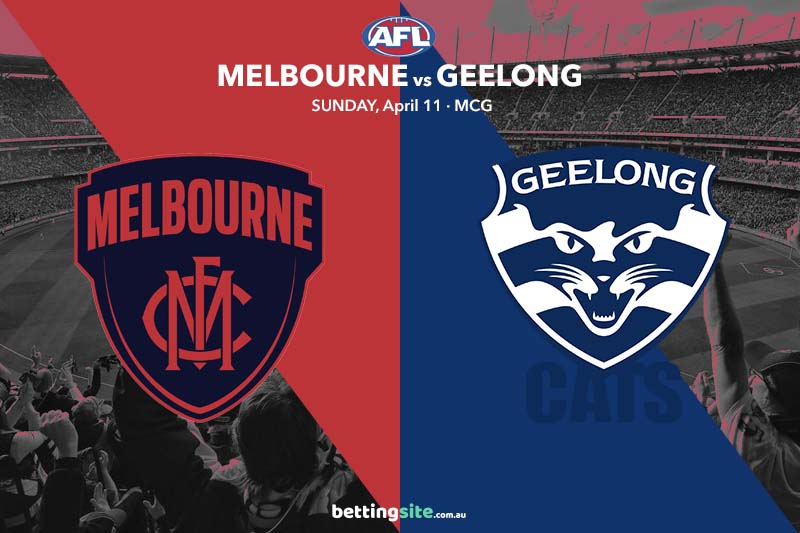 Undefeated Melbourne host a Geelong outfit sitting 2-1 after three rounds, in what looms as match of the day, at the MCG on Sunday.

Three of the last five matches between the clubs have been decided by under a goal and this AFL round 4 match has got all the hallmarks of another close encounter.

Melbourne came through their win against the Giants with a clean bill of health and are likely to meet with Geelong with an unchanged lineup.

Geelong will be without off-season recruit Shaun Higgins (hamstring) and Francis Evans (ankle) after they both suffered injuries in the Cats’ narrow win over Hawthorn on Easter Monday. The Cats will be boosted by Sam Menegola but star recruit Jeremy Cameron is an unlikely starter despite recovering from his hamstring injury.

Up until half time in Canberra last weekend, Clayton Oliver had only five touches to his name after being blanketed by the Giants tagger Matt De Boer. Fast forward a week and he is set to come up against Mark O’Connor, who over the last fortnight has done a fantastic tagging job on Brownlow Medal winers Lachie Neale and Tom Mitchell.

O’Connor will follow the Dees midfielder wherever he goes and could even mind Oliver if he heads down to the forward line. Oliver did this with some sucess against the Giants in the second-half last week. This looks to be a tough test for Oliver and online bookmakers have Clayton Oliver at $1.40 to rack up 30 or more disposals, and we strongly suggest that you avoid the skinny odds.

Online bookmakers have installed the undefeated Dees as $2.00 outsiders in their match up against Geelong. If it was not for a holding the ball decision against the Lions that was not awarded or coming up against a Hawthorn side with a touch more polish on their skills then the Cats could very well have been 0-3 heading into this contest. Melbourne by 1-39 looks to be the play on Sunday afternoon and with $2.50 on offer for them to do so, it is a must have in any same game multis.

The Cats will be hanging out for Patrick Dangerfield to return from suspension and Jeremy Cameron so Tom Hawkins gets a chop out in the forward line. Hawkins is set to get head-to-head with Steven May, arguably the best backman in the game at the moment. Hawkins loves a challenge and a big stage, but has just the seven goals to his name to begin his season. Odds of $3.75 are on offer for Hawkins to kick 4+ goals against Melbourne and we think he will do so, just to remind everyone that he is still one of the best tall forwards in the game.

Cameron Guthrie 30+ Disposals @ $2.00
Cam Guthrie has seemingly struggled when coming up against Melbourne in the past averaging a meek 14 touches each time these two teams meet. However the Cam Guthrie of 2021 is solidifying himself as one of the best midfielders in the competition and without Dangerfield in the side has been a key factor to the Cats winning their last two games. Coming off 43 disposals against Hawthorn on Easter Monday we are expecting Guthrie to continue his good form and build on his season average of 31 disposals per game.

Cameron Guthrie to get 30+ Disposals

If Christian Petracca is to become one of the true superstars of the game he needs to be hitting the scoreboard on regular occasions. He gets the perfect opportunity to help lead the Dees to a 4-0 ledger, something they have not been privileged to for some time. When Melbourne last played at the MCG in Round 1, Petracca had 24 touches and bagged two goals on the day and we are expecting similar results from Petracca in what could be a best on ground performance.

The value in this matchup looks to come from Melbourne winning by 1-39 over the inconsistent Cats. We are confident that Melbourne will move to 4-0, despite a big haul from Cats forward Tom Hawkins and a fair old case of leather poisoning from Cam Guthrie. However, it will be the class of Melbourne’s midfield led by Christian Petracca who will be leaving the MCG with the four points.