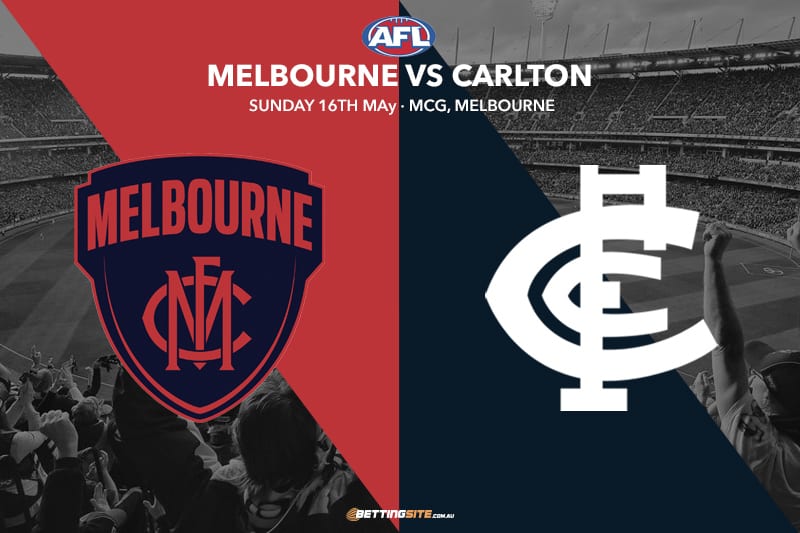 Melbourne host Carlton on Sunday afternoon at the MCG in one of the mor eintriguing matchups in round nine of the 2021 AFL Premiership season.

Melbourne were workmanlike when accounting for Sydney last week sneaking home by nine points. The Dees are set to be bolstered by the inclusion of key forward Sam Weideman after Luke Jackson (finger) was ruled out for the next fortnight.

Carlton were impressive for the best part of three quarters against the Western Bulldogs last weekend, but faded out shockingly in the last quarter. The Blues need to find a replacement for Jack Silvagni (concussion), whilst Nic Newman and Marc Murphy look set to add some much needed experience to the Blues lineup.

Unsurprisingly, Melbourne are red-hot $1.31 favourites in head to head markets with online bookmakers, whilst Carlton are distinct outsiders at $3.50 for Sunday afternoon’s clash.

For the first time since 1965, Melbourne are sitting 8-0 after eight rounds of footy, and will be looking to continue that strong form against an inconsistent Carlton lineup. Clayton Oliver and Tom McDonald were instrumental in Melbourne’s win last weekend against the Swans and the Dees will be needing them to continue on that form to avoid any scares on Sunday.

Carlton led by as much as 27 points last weekend against the Western Bulldogs, with Harry McKay and Eddie Betts combining for nine goals between them. They will need a big lift from skipper Patrick Cripps who only gathered 15 touches last weekend. If Cripps brings his best, and the Blues can backup their first three quarters from last weekend, they can certainly give this a shake on Sunday.

McKay is in career-best form and if he gets some decent delivery from the likes of Sam Walsh and Zac Williams, May might have his work cut out for him all day.

The difference between Carlton’s very best and their worst is quite stark, and with the line being set at three and a half goals, the Dees look a smart play. With the inclusion of Sam Weideman to their forward line, Melbourne add another weapon to an already stacked forward line. Carlton’s key defender Jacob Weitering, Liam Jones and co will have their full with Ben Brown, Tom McDonald, Sam Weideman, and the plethora of small forwards Melbourne possess.

James Jordon to get 20+ disposals

James Jordon is quickly becoming a strong chance to take out this year’s Rising Star award, and we expect him to continue his smart early season form against the Blues. He has crossed 20 disposals four times from his first eight games, including a career-high 23 against Sydney last weekend. We anticipate Jordon to rack up 20 disposals on Sunday and with almost $2 on offer it seems good enough value for such a consistent first year player.

Melbourne should be leaving the MCG as still the only undefeated team with nine wins next to their name. Carlton will put up a strong challenge for most of the day with their small forwards proving tough to handle. The Dees have three big forwards that are proving hard to keep quiet, with a different forward popping up each week and kicking a bag, and the addition of Ben Brown has certainly helped who has five goals from his first two games as a Dee.