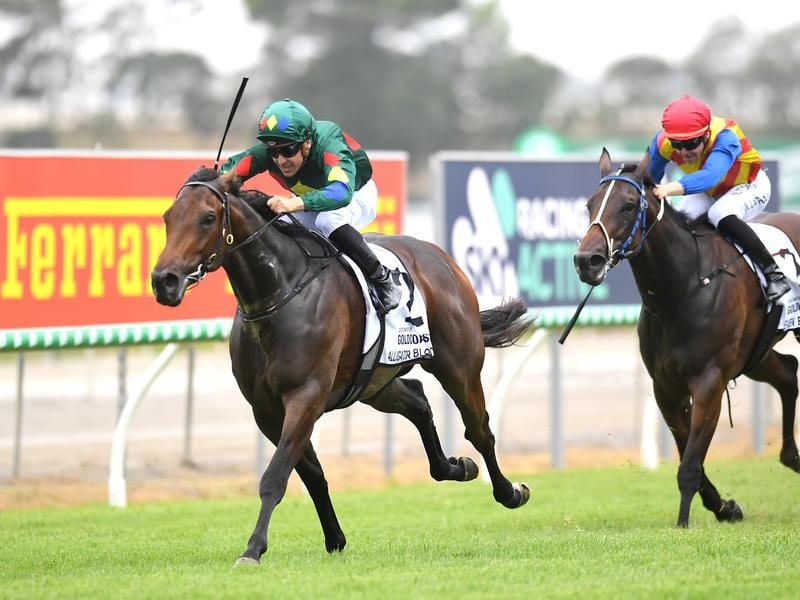 Magic Millions Guineas winner Alligator Blood is not certain to have a Melbourne autumn campaign.

Alligator Blood has been promoted to favouritism for two major autumn races but trainer David Vandyke has warned he is not certain to run in either.

The three-year-old confirmed his status as one of the country’s glamour horses with his win in Saturday’s $2 million Magic Millions Guineas at the Gold Coast after a dramatic prelude to the race.

The floats bringing Alligator Blood and several other horses were held up on the highway because of an accident which closed the road.

They eventually arrived with the aid of police motorcycle escorts.

Alligator Blood showed signs pre-race to give Vandyke cause for concern but his final 300 metres was a demonstration of class and dominance against his rivals.

He now heads markets for the Australian Guineas at Flemington and the All-Star Mile at Caulfield but Vandyke and the gelding’s owners will let the dust settle before committing to a Melbourne campaign.

“I’ll make a decision next week about our next move. Whether he ‘s going to head towards Melbourne or whether he goes for an extended break,” Vandyke told Sky Sports Radio.

Vandyke moved from Sydney to the Sunshine Coast three years ago and now considers himself a Queenslander.

Although when he made the move, Group One winner Yankee Rose was the stable star, he considers Alligator Blood to also be a true Queenslander.

The trainer said although Alligator Blood was a little down after his win he had picked up by Monday.

“Yesterday he was a bit dusty and he left a bit of feed overnight,” he said.

“This morning he had that spring in his step again and I took him down for a swim.”

Yankee Rose won the 2016 Spring Champion Stakes and ran third behind Winx and Hartnell in that year’s Cox Plate but Vandyke believes Alligator Blood can go on to great things.

He has won eight of his nine starts with his nose defeat by Super Seth in the Caulfield Guineas one that still hurts.

“We went the early crow. We thought he had won,” he said.

“But he is a gelding and he could be around for years to come.

“So whether we go to Melbourne or not, I’ve had people say he could be an Everest horse or a Golden Eagle horse.

“There are a lot of races for him.”

Alligator Blood heads the Australian Guineas market at $4 from Catalyst ($6) and is at $7 for the All-Star Mile with Kolding next at $8.