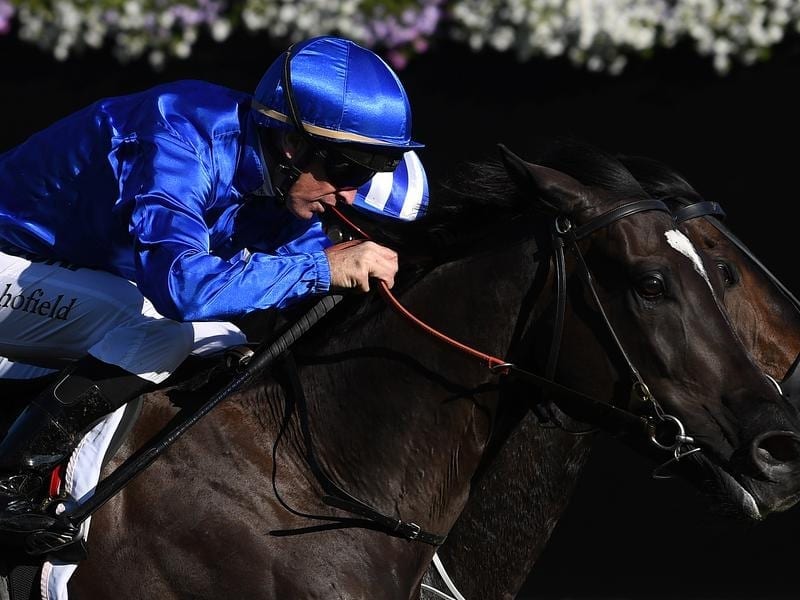 Melbourne Cup favourite Avilius (blue) is set to have his lead-up run in the Cox Plate.

James Cummings will set Melbourne Cup favourite Avilius on the same path as Saintly by running the stayer in the Cox Plate at Moonee Valley.

Unbeaten in four starts since arriving in Australia, Avilius leapt to the top of Melbourne Cup betting with his victory in The Bart Cummings at Flemington on Saturday, earning a ballot exemption into the $7 million race on November 6.

Cummings grandfather, the late Bart Cummings, trained Saintly to win the 1996 Cox Plate before he claimed the Melbourne Cup at his next start.

“He now has his first victory over a staying distance and under a lot of pressure he was able to prove he could still perform and show that turn of foot despite a genuine and tough pace throughout,” Cummings said.

“We can now give the horse three weeks to the Cox Plate and if we’re lucky enough to gain a start in that race, then he’ll be perfect for the Melbourne Cup.”

Avilius was an absentee from Tuesday’s second acceptances for the Caulfield Cup on October 20.

A total of 47 horses remain in contention for the $5 million handicap over 2400m which has a capacity field of 18 with four emergencies.

A number of potential runners will be trying to force their way into the race by winning a ballot exemption in either the Caulfield Stakes or Herbert Power Stakes on Saturday.

Among the 47, up from 36 last year, 10 international horses currently housed at the Werribee quarantine centre remain in the field with five safely within the cut-off limit of 18.

The Melbourne Cup still has 85 horses in contention, up from 55 and 52 respectively in the past two years.

Of the 85, 22 are internationally trained, up from 14 last year while of the 22, 12 are inside the field limit of 24, including six due to arrive in Australia on Saturday.

Three-time Cox Plate winner Winx has scared off a number of her rivals at Moonee Valley with 25 horses still in the race, down from 36 last year.