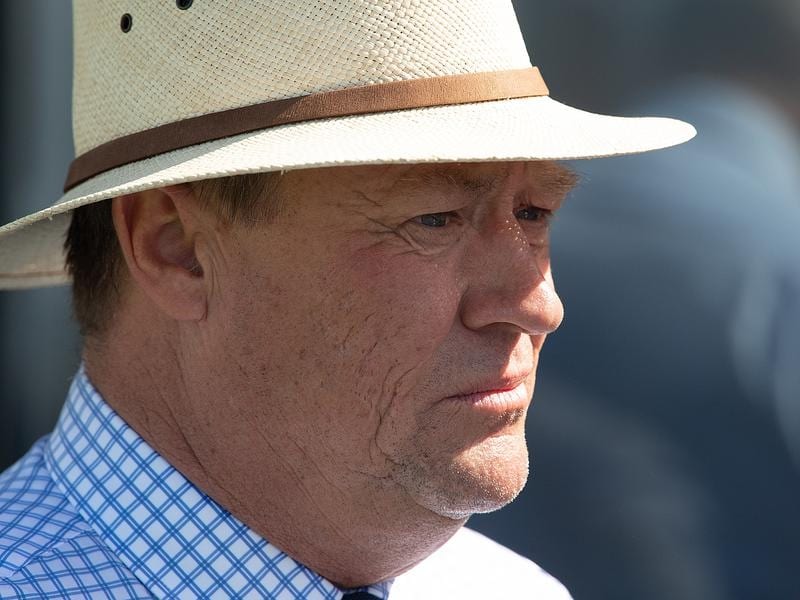 Tony McEvoy will test the staying potential of Divanation and Light The Waves at Warrnambool.

Trainer Tony McEvoy says the timing is right to try two of his young mares over a staying trip in the Warrnambool Cup.

Divanation and Light The Waves run in Thursday’s Listed race over 2350m, the feature flat race of Warrnambool’s three-day carnival.

“They are two young mares that are really progressing nicely and it’s so nice to see that they’ve drawn well,” McEvoy said.

“I thought it was a nice progression to get them out to the 2350 metres at this stage of their careers.

Divanation is a daughter of three-time Melbourne Cup winner Makybe Diva and will be lining up for her sixth start on Thursday, having previously netted two wins and three minor placings.

After a victory at Geelong on April 4, Divanation followed up with a second placing to Grinzinger Star over 2000m at Caulfield on April 20.

Luke Currie had the ride that day and will be aboard again on Thursday.

“I thought her run the other day was superb,” McEvoy said.

“The pressure came on at the half-mile in that race and they really strung it out.

“It was her first big contest and I thought it was a real pass mark.

“Luke said it felt to him that the further the better for her so getting her out to this trip is ideal.”

Light The Waves is aiming for her third consecutive win after scoring at Morphettville on March 16 over 1950m and again at that track over 2250m on April 6.

At her most recent appearances, Light The Waves has scored under Barend Vorster who makes his first trip to Warrnambool on Thursday.

“She’s won her last two and last start she beat Valac who had run second at Flemington prior to that race and has come out and run third the other day in Melbourne,” McEvoy said.

“Her form is very strong and I thought it was a good chance to get some black type on the mare.”

The former Singapore-based Vorster has been in great form since moving to Australia as McEvoy’s Adelaide-based stable rider.

The pair has teamed 59 times, recording 20 victories and a further 16 placings.

“He’s certainly got great ability and if I can give him the right stock, we’re going to get a result.”