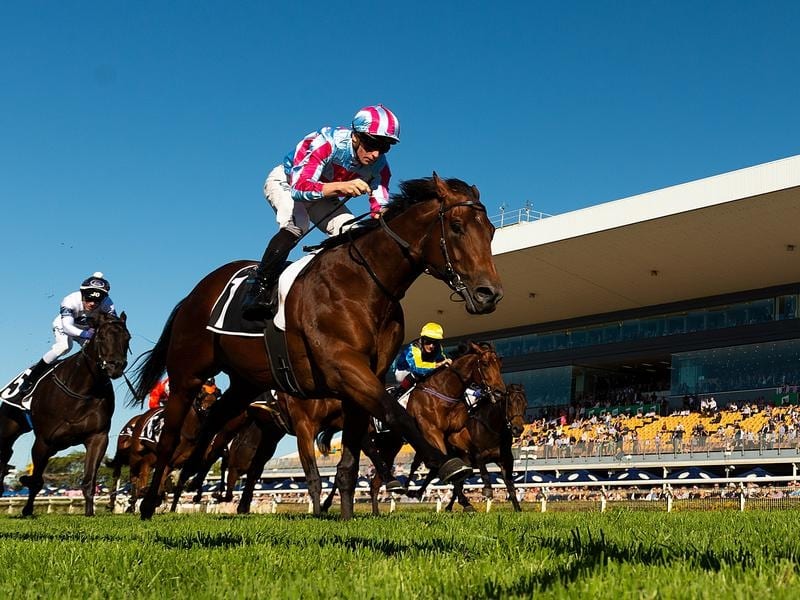 Dubious has won the Champagne Classic at his first start since running in the Golden Slipper.

Jockey James McDonald produced one of his best rides to win on Dubious before declaring the colt was ready to tackle the remaining big-name two-year-old races during the Brisbane winter carnival.

After being in a pocket in the straight, McDonald got Dubious ($2.80) into the clear and he was far too good for the dead-heaters Czarson ($5) and Strasbourg ($6) scoring by 1-1/4 lengths in the Group Two Champagne Classic (1200m).

Dubious has been in work since last year and has raced in the Magic Millions carnival, where he was second in the 2YO Classic, in January and was then 10th in Sydney’s Golden Slipper in March.

The colt was having his first start since the Slipper and both McDonald and co-trainer Ciaron Maher believe there is improvement in Dubious.

The first thing Maher did when McDonald retu ned to scale was to check with the champion jockey about whether Dubious should continue on into the rest of the winter.

“I was willing to roll the dice and run Dubious in races like the BRC Sires (over 1400m) and the JJ Atkins (over 1600m) but I wanted to check with James first,” Maher said.

“He is a big horse who likes racing. I know he has been racing for a while but we came for the winter because it is a long time between the autumn and the spring.”

McDonald said he felt Dubious had improvement in him and could race in the longer races.

“He is a beautiful colt to ride. Once we got in the clear he really accelerated,” McDonald said.

Kerrin McEvoy said his mount Strasbourg had finished well and was looking for further.

Czarson hit the lead at the 200m but was no match for Dubious in the final 100m.

The Champagne Classic has proved a good guide to the JJ Atkins Stakes in the past decade with Pressday (2010) and Sizzling (2012) completing the double while several other winners have been placed in it.