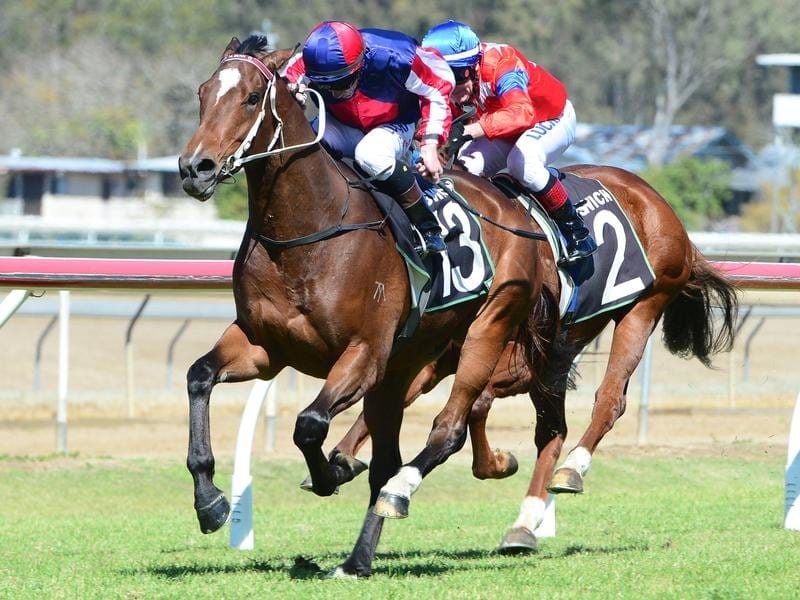 Trainer Matt Dunn is keen to see how Thunderous Strike performs over 1600m at Doomben.

Trainer Matt Dunn’s assault on The Kosciuszko has stepped up a notch but first his attention swings to Doomben with Thunderous Strike.

The gelding will be having his third race start in Saturday’s QTIS Three-Year-Old Handicap (1600m).

Dunn has a big opinion of the gelding who scored at Ipswich over 1350m at his most recent start.

“He had a tricky barrier at Ipswich and Jim (jockey Byrne) had to go forward,” Dunn said.

“I am sure he will be better ridden with cover and over more ground.

“We were going to run him on Wednesday at the Sunshine Coast but that race was scrapped. This is our chance to get out to 1600 metres and we will probably ride him back at his first go at the trip.”

Dunn believes Thunderous Strike can be a stakes horse next year but first the gelding might head to Sydney for a Highway Handicap for country-trained horses.

The Murwillumbah trainer hopes to have Care To Think, Snitz and Lifesaver in the $1.3 million Kosciuszko (1200m) at Randwick on October 13.

“Care to Think will have a trial on October 2 and go into the big race first-up,” Dunn said..

“He has had a tie-back operation but he went 31.6 seconds for 600 metres in track work on Tuesday morning which is outstanding. He is a genuine Group One horse.”

Dunn said he couldn’t be happier with Snitz who won a trial at the Gold Coast on Tuesday.

“His time was very fast and I think it shows this should be his campaign. He has never before trialled that well” Dunn said.

“I would expect him to get a Kosciuszko spot. He will either trial on October 2 or have a Brisbane start a week earlier before going into Randwick.”

Lifesaver will run in Sydney on Saturday and Dunn hopes he will step up and also put himself in the Kosciuszko picture.

People who have bought tickets in The Kosciuszko on October 13 will find out next week whether they have won the right to negotiate with owners to run a horse in the race.