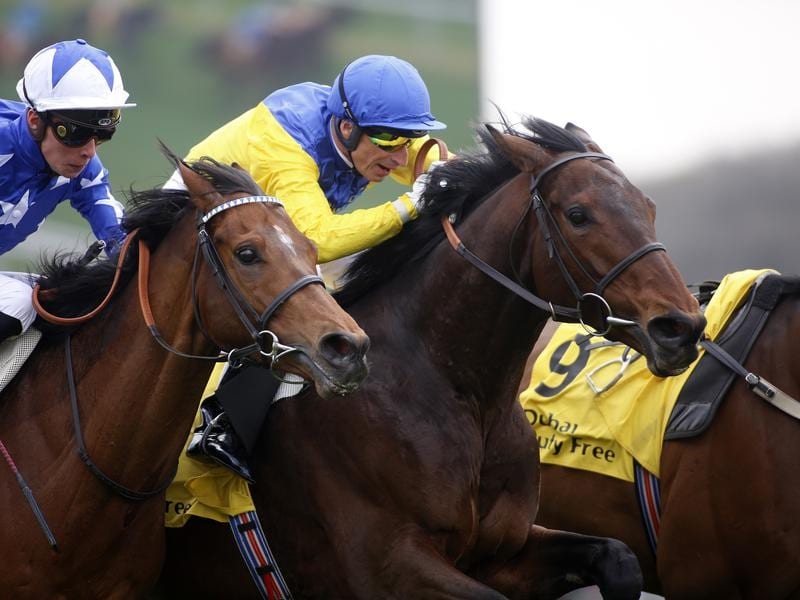 Marmelo (blue cap) has won at Newbury with his trainer eyeing a third tilt at the Melbourne Cup.

Melbourne Cup runner-up Marmelo has made a triumphant return to racing with a Group Three victory at Newbury with a third trip to Australia in trainer Hughie Morrison’s mind.

Entering the final furlong (200m), Morrison’s stable star looked as if he would run fourth but unleashed a powerful finish at the end of the 2400m and pulled a length clear of Aspetar.

“It is fantastic to win on your home track,” Morrison said.

“I don’t think he has been within 200 miles of home in the last three years. He was a bit fresh when he got here.

“Why not (go for the Melbourne Cup again) as long as the handicapper doesn’t over-do him. I think we will stick to mile-and-a-half races in Europe and try to go up the grades.

“He did the last four furlongs in the Melbourne Cup faster than the Group One sprint that day. He is not slow.

“He obviously takes a furlong to get going, as you have seen today. Once he found that gear he (Gerald Mosse) knew he was going to get up.

“I put him in the Coronation Cup, basically if we came here and won, and it doesn’t look so stupid now.”

Marmelo finished ninth in the 2017 Melbourne Cup and a length behind Cross Counter last year.