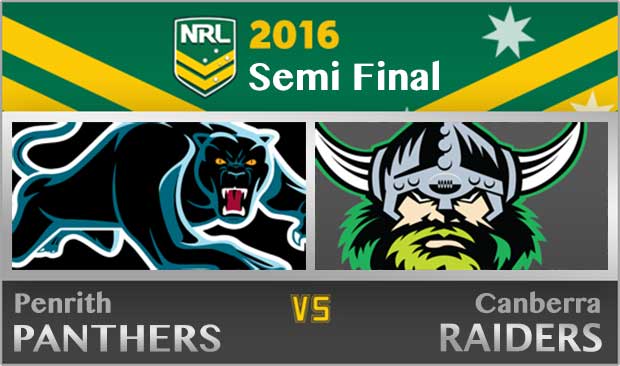 TWO old combatants in the form of the Raiders and the Panthers clash in the nation’s capital this weekend in a cutthroat semi-final match up that promises to be an absolute belter.

The last time Canberra and Penrith played they were separated by just one point all the way back in round 9.

The Raiders were shock losers on the weekend to the Cronulla Sharks, and coach Ricky Stuart has a few selection headaches going into the weekend.

Englishman Josh Hodgson limped from the field after sustaining an ankle injury and did not return.

The Raiders have named him in their line up for Saturday’s do-or-die clash, but the man himself believes he is only a ‘slim’ chance to run out on GIO Stadium this weekend.

“It’s not great, there is a bit of ligament damage, bit of bone bruising on the inside as well, so it’s not great,” Hodgson said.

“Chances-wise it’s pretty slim, but I’m just going to do everything I can to be right for the weekend.

“I’m having to play it day-by-day and just see how it settles down.

“It settled down pretty well yesterday, but then today it’s a little bit sore again. Just taking each day as it comes really.”

In positive injury news for the Green Machine, star fullback Blake Austin has been named for the first time since injuring his hand in a training mishap in the lead up to round 24.

The Penrith Panthers swept aside the Bulldogs last week to book their ticket to Canberra.

The Panthers were clinical, scoring five unanswered tries after conceding the first to record an impressive 16 point win.

Penrith employed an interesting tactic of attacking the Bulldogs’ defence right up until the final tackle ,rather than implementing a kick at the end of each set of six.

The method meant the Dogs did not have a chance to catch their breath and it paid dividends as Canterbury ran out of gas early in the second half.

Penrith coach Anthony Griffin was coy when asked about the plan post-match.

“I’d much prefer us at times to make sure we finish the set off the way we want to finish it off.

“There’s no rule that says you’ve got to kick it on the last play.”

The match between the Raiders and the Panthers promises to be a classic, but rather than dissect the match itself we have elected to look at the try scorer markets for both sides.

We have identified a player from each side that we think will cross the line at some stage on Saturday night, and we are confident that these two boys can boost our bank balance in the nation’s capital.

Jordan Rapana is the best attacking threat the Raiders have and will be pivotal to Saturday night’s outcome.

The 27-year-old Kiwi has been an absolute revelation for the Green Machine across 2016, and his scoring record – which extended to three straight matches scoring at least one try last weekend – is exemplary.

The powerful winger may be called upon to have even more of a scoring impact if Josh Hodgson is unable to take his place and we believe he will relish the opportunity to guide his side to victory on Saturday night.

We are backing Rapana to cross the chalk at some time throughout Saturday night’s semi-final, and we think an early score might be on the cards given how important this match is to the Green Machine.

Jordan Rapana to score the first try for Canberra: $4 @ WilliamHill.com.au

Jordan Rapana to score a try at anytime: $1.55 @ WilliamHill.com.au

Superstar winger Josh Mansour is our selection in the try-scoring markets for Saturday night.

Mansour has been in scintillating form and is one of the driving forces behind Penrith’s sparkling run which has seen them win six matches in a row.

The 26-year-old has scored a try in his last two matches, one of which he crossed the line first.

Mansour represents terrific value across the board and the price punters can get on him to score a try at anytime is just too good to ignore.

If the Panthers are to make it a magnificent seven wins in a row, Mansour will play a huge part.

Josh Mansour to score the first try for Penrith: $5.50 @ WilliamHill.com.au

Josh Mansour to score a try at anytime: $1.91 @ WilliamHill.com.au