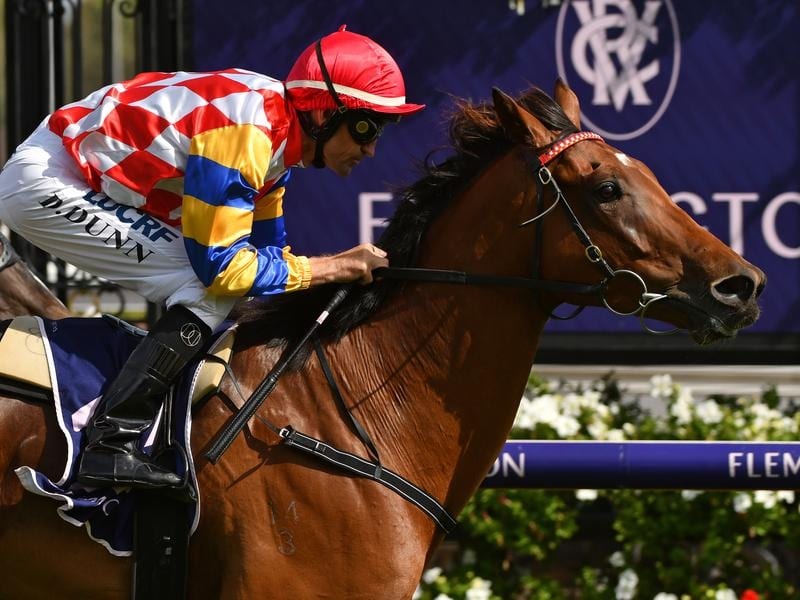 Manolo Blahniq runs in the Victoria Hcp as a possible forerunner to the Stradbroke in Brisbane.

A Queensland campaign featuring Brisbane’s signature race could be on the cards for Manolo Blahniq if the gelding makes his mark in the Group Three Victoria Handicap at Caulfield.

The Tony Noonan-trained Manolo Blahniq has not had the best of luck in his recent races but Noonan is hoping that changes for the sprinter-miler in Saturday’s Group Three event over 1400m.

Manolo Blahniq was second to Naantali in the Listed Anniversary Vase over the Caulfield 1400m two weeks ago and had excuses when he was held up early in the home straight.

Before that the five-year-old finished midfield in the Hareeba Stakes (1200m) on his home track at Mornington when he had to go back from a wide gate and circle the field in his first start for eight weeks after having a muscle issue.

Winner of the Chester Manifold Stakes at Flemington earlier this campaign, Manolo Blahniq has finished second the past three times he has been taken to Caulfield but is the $2.80 favourite to go one better on Saturday.

The gelding’s task has also become slightly easier with Naantali scratched to instead run in the Group One All Aged Stakes in Sydney.

“He hasn’t had a lot of luck in his past three starts and even when he won at Flemington he was trapped deep,” Noonan said.

“He has been racing well despite that.

“He’s very honest and even when things don’t work his way he has still been very resolute in his finish. Hopefully this weekend he gets a bit of luck.”

Noonan believes Manolo Blahniq is well-placed on Saturday and said he had ticked over nicely since his last start.

“He’s a fit horse so he goes there in good order,” Noonan said.

“If he can perform well on Saturday we’ll just see.

Queensland options include the Group One Stradbroke Handicap at Eagle Farm in June.

“He has had six starts this preparation. We had that little muscle issue so that meant we just changed up what we had originally planned to do with him but he’s a tough horse and he has really thrived on his racing this time in.

“So if he wins on Saturday we’ll give it some thought.”