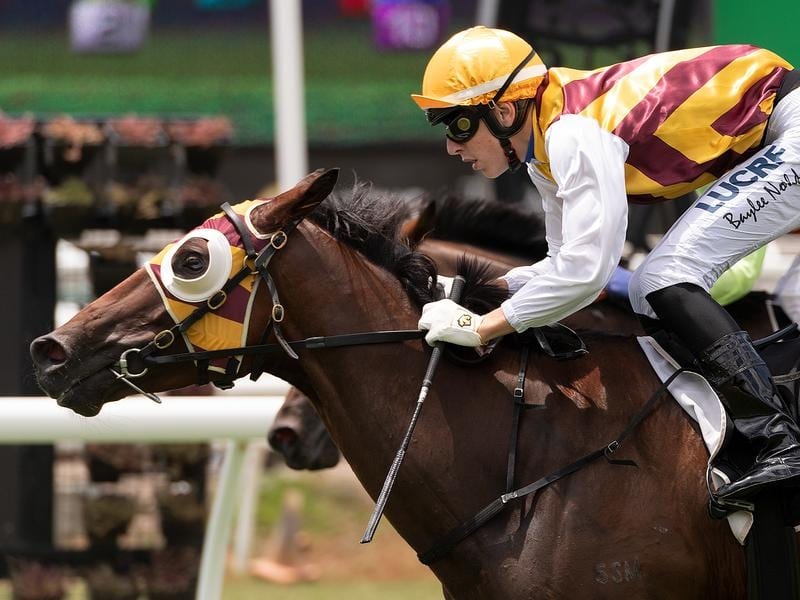 Linda Huddy’s liking for Lucas Cranach’s progeny was rewarded when Get Stuck In won at Eagle Farm.

Owner Linda Huddy’s liking for the offspring of sire Lucas Cranach paid dividends when Get Stuck In scored an impressive win at Eagle Farm.

Huddy and her husband Graham are among the biggest horse owners in Australia and have had great success including Australian Derby winner Shoot Out and Victorian Derby victor Preferment.

They have some expensive horses with trainers throughout Australia, including Brisbane’s leading trainer Tony Gollan.

However, they have several horses with Gollan who are by Lucas Cranach a former German galloper who ran third in the 2011 Melbourne Cup.

“I have run out of fingers and toes counting the number of horses we have by Lucas Cranach and I think he is just starting to come into his own,” Huddy said.

“The last time I checked he had 15 winners but I think there will be more in the city soon.”

Gollan agreed and said he felt Get Stuck It could go on to win more Saturday metropolitan races.

“I honestly thought he was my best chance for the day and I have a few chances here,” Gollan said.

He will consider trying Get Stuck In over more ground.

“I must say he is no oil painting but he does try very hard,” Gollan said.

He paid tribute to 3kg claiming apprentice Baylee Nothdurft who didn’t panic when Get Stuck In was forced back through the field.