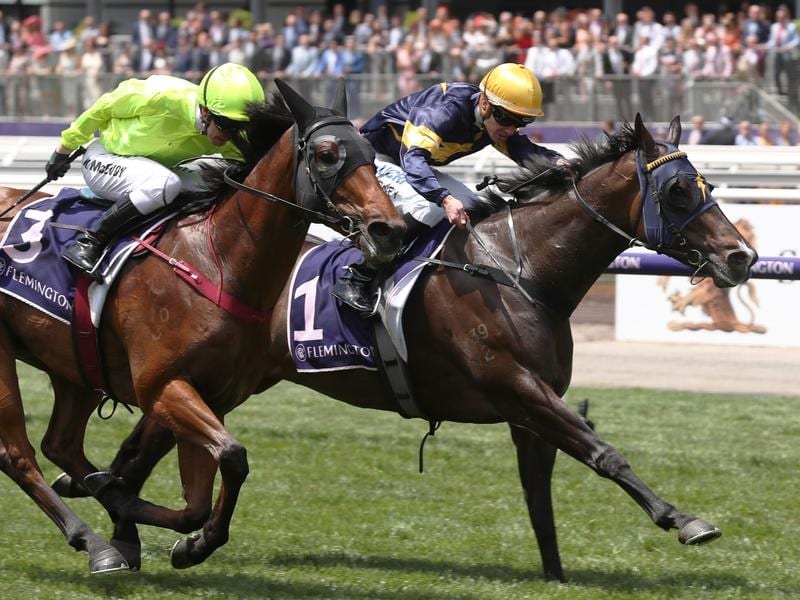 Loyalty Man (R) ended a long absence from the winners’ stall with a narrow victory at Flemington.

Mike Moroney is happy to have got it wrong after Loyalty Man prevailed in a photo finish to the opening race on the final day of the Melbourne Cup carnival at Flemington.

The Moroney-trained Loyalty Man ($7), having his third start back after a year off the scene, held on to deny $2.60 favourite Manuel in Saturday’s Melbourne’s Own 3AW Trophy (1600m).

“I thought he had got beaten, and I’m not usually wrong,” Moroney said.

The victory was Loyalty Man’s first in almost two years.

Moroney said it was great to see the gelding, who has had his issues in the barriers during his career, back winning after having to spend months off the scene because of injuries suffered last season.

“This horse has done a really good job because I thought for a while he wouldn’t race again after the injuries he suffered,” Moroney said.

“We put him through the barriers up at Randwick because he got banned from racing for the second time because of his barrier manners.

“He had been going through as good as gold and then one day he just went berserk, flipped over and thrashed around.

“He broke three ribs and crushed a vertebrae.

“The diagnosis wasn’t very good for a while but we persevered and gave him the time out.”