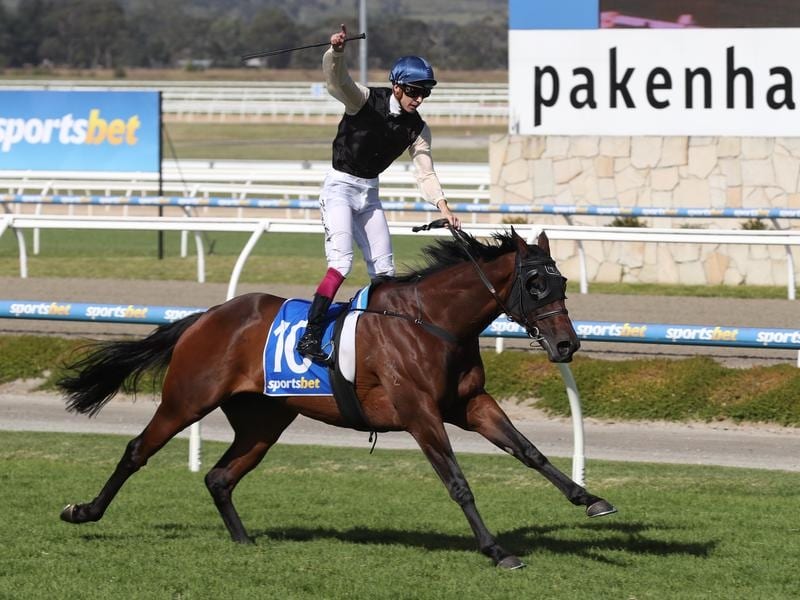 Jockey Fred Kersley has been fined for his Pakenham Cup celebration on the winner Etah James.

Fred Kersley went out with a plan to make the Pakenham Cup a strong staying test on Etah James.

And it worked to perfection as the apprentice jockey his biggest race win.

In an upset on the Matt Cumani-trained mare, Kersley stood high in the irons as he crossed the line a comfortable winner.

But Racing Victoria stewards took a dim view of Kersley’s celebratory gesture, fining him $750 while also suspending him for six meetings for his whip use on Etah James before the 100m.

Sent off a $61 chance in Saturday’s Listed race, Etah James recorded a 1-1/2 length win over the $2.20 favourite Secret Blaze with Midterm ($21) three-quarters-of-a-length away third.

Kersley looked at the infield big screen passing the 200m and said he couldn’t believe what he was seeing.

“This is my biggest achievement. I’d never won a black type race, so to get that means a lot to me,” Kersley said.

“I’m a tall jockey, but I didn’t think I got up that high in the irons, but maybe I did.”

Kersley said he used Etah James in the early stages of Saturday’s 2500m race to get in a forward position, but then admitted to getting an easy run down the back straight.

Knowing Etah James was coming back from the 3200m of the Sandown Cup to 2500m on Saturday, Kersley wanted to make sure of getting going early.

“Speaking to the boss on the way here he gave me a fair amount of confidence,” Kersley said.

“The horse was rock-hard fit for today and was working up nicely.

“It was an easy steer for me. I took off at the thousand-metres and luckily she kept going.”

Etah James’ win was the second leg of a long shot double for Kersley and Cumani having scored earlier with Future Score at the healthy price of $17.

Cumani was absent on Saturday attending the the wedding of his brother-in-law Henry Bell.

While enjoying the celebrations, Cumani was in trouble with wedding guests for not tipping either horse.

“I might not be the most popular person at the wedding after the two winners as I didn’t tip them,” Cumani.

“But it’s a great result for the stable.”