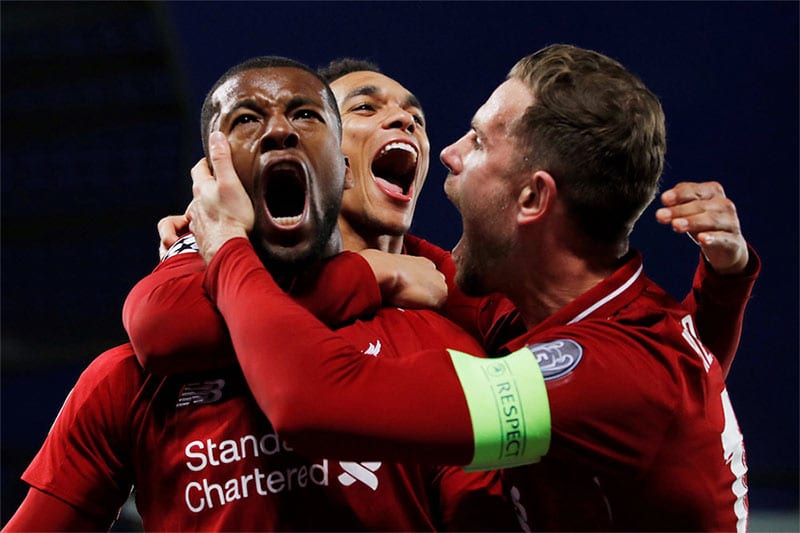 Bet365.com.au has installed Liverpool as short-priced favourites for the UEFA Champions League title after their stunning win over Barcelona on Wednesday morning.

Some online bookmakers have brought the English giants as short as $1.40 in the outright markets on the back of what pundits are calling one of the greatest comebacks ever seen in European football.

Liverpool entered the second leg of their semi-final tie as rank outsiders after suffering a heavy defeat at Camp Nou last week.

Jurgen Klopp’s men had played well in Spain for little reward, with Barca claiming a 3-0 win courtesy of a second-half brace from Lionel Messi.

That meant Liverpool would have to score at least three goals at home and concede none to have any chance of progressing to the final.

That task was made all the more monumental when star forwards Mohamed Salah and Roberto Firmino were ruled out of the return clash at Anfield.

Their absence resulted in rare starts for Divock Origi and Xherdan Shaqiri – two players who have seen precious little game-time since the turn of the year.

It turns out Reds fans need not have worried, with Origi striking twice and Shaqiri providing a crucial assist as the home side stunned the Blaugrana with four unanswered goals.

The other unexpected hero of the night was Georginio Wijnaldum, who found the back of the net twice within three minutes after replacing the injured Andy Robertson at half-time.

With their biggest problem out of the way, Liverpool will head to the decider in Madrid later this month as the team to beat.

They will face either Ajax or Tottenham Hotspur, neither of whom have tasted any success on the European stage in the past two decades.

The Dutch side takes a 1-0 advantage and a crucial away goal into Thursday morning’s second leg in Amsterdam.

Liverpool now turn their focus to the final round of the 2018/19 English Premier League season, where a win over Wolverhampton Wanderers will give them a slim chance of snatching the title from Manchester City.

All markets courtesy of Bet365.com.au