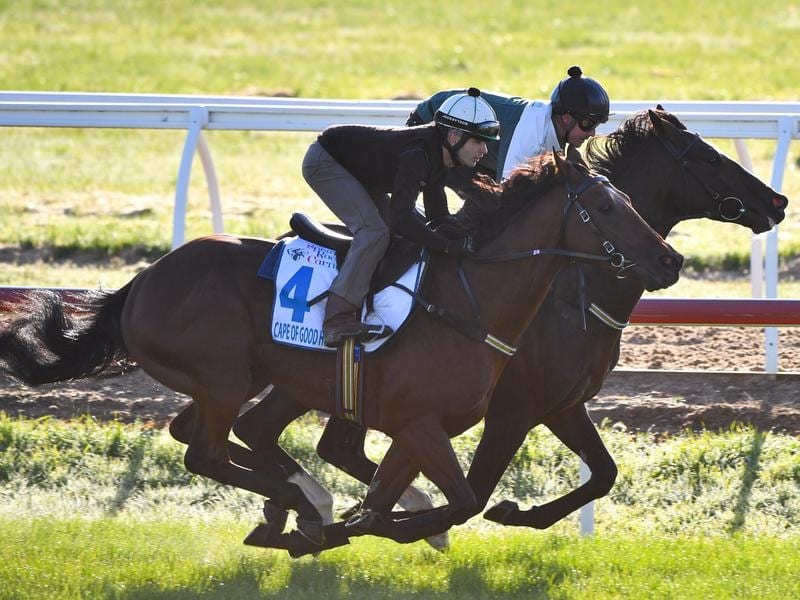 Spring imports Cape Of Good Hope (outside) and Constantinople have have galloped at Werribee.

Senior Lindsay Park co-trainer David Hayes likes the look of his two spring carnival purchases from Aidan O’Brien after they were put through their paces at Werribee.

Caulfield and Melbourne Cup hope Constantinople was joined by Cox Plate contender Cape Of Good Hope in a workout on Wednesday morning, their first serious hit-outs since arriving from Europe on Saturday afternoon.

The pair are in quarantine until October 12 after which they will transfer to the Flemington stables of Lindsay Park.

Cape Of Good Hope is set to run in the Caulfield Stakes (2000m) that day while Hayes will seek permission to gallop Constantinople at Caulfield the same day in preparation for the Cup the following week.

“They grabbed the bit beautifully and strode out well, their actions looked good, they breathed well, and I couldn’t be happier with them,” Hayes said.

“They were willing, wanting to go faster and the jockeys were both happy with them.”

Hayes said he was taking a cautious approach with the pair until their quarantine stay at Werribee finishes, saying they would continue to work at around 75-80 per cent capacity.

“I’m taking a cautious approach and I’m treating their first run as education and hopefully they’ll springboard out of it,” Hayes said.

“Criterion won a few of years ago (Caulfield Stakes) and then ran second to Winx, so it has worked pretty well.

“They arrived here pretty fit anyway, so it’s just a matter of keeping them happy.”

Luke Nolen, who has been booked to ride Constantinople in the Caulfield Cup, had his first ride aboard the northern hemisphere three-year-old on Wednesday morning.

Constantinople is on the third line of Caulfield Cup betting at $15 and is also high up at $18 in Melbourne Cup markets.

“He’s a nice athletic horse and it was a happy first experience,” Nolen said.

“He’s a bit deceiving. He looks like he’s still got furnishing to do, but you wouldn’t know it to be on top of him.

“He does take a nice long stride and you feel that underneath you.