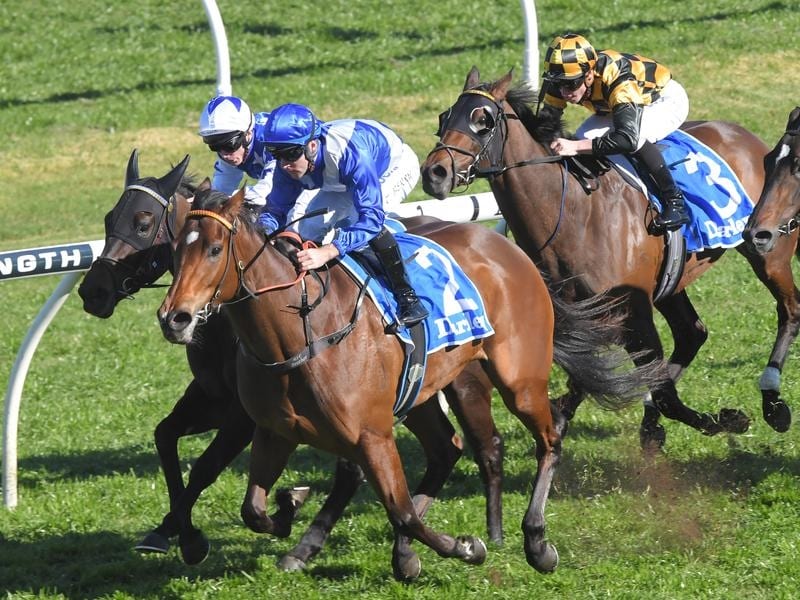 Libertini (right) has had to call on all of her class to beat Villami in the Furious Stakes.

The margin wasn’t as big as expected but Libertini has proven she has courage as well as class, chasing down Villami to score a narrow but decisive Furious Stakes victory at Randwick.

The star filly gave punters who took the $1.18 quote a scare when she ranged up to leader Villami at the 200 metres but had to dig deep to get past the Gerald Ryan-trained filly, eventually gaining the upperhand by a short neck.

There was plenty of banter between winning trainer Anthony Cummings and owner Gerry Harvey post-race with the billionaire businessman, who rarely makes a trackside appearance, saying in the end he was happy to get the win.

“I thought my horse would win by three or four lengths and it didn’t and I was bitterly disappointed,” Harvey said tongue-in-cheek.

“We won and that’s the most important thing.

“We’ve got the best three-year-old filly in Australia, I think. Well I thought we did before this run.”

Cummings provided the voice of reason and said Libertini did a tremendous job to overcome the blustery wind and chase down the leader after settling further back than he anticipated.

“I thought in the run he was maybe a length too far off the leader to be safe and I think that’s the way it turned out,” Cummings said.

“I don’t think there’s any other horse who could have picked up the leader so she doesn’t lose anything in terms of stature.

“At the end of the day she’s won the second leg of the Princess series and that’s what we came her to do.”

Libertini’s time supported Cummings’ upbeat mood with the filly running the 1200 metres in 1:09.22, a shade outside the race record and almost a second faster than stablemate Baller clocked a race earlier.

She will now go to the third leg of the Princess Series, the Tea Rose Stakes (1400m) and while the $14 million The Everest looks a long shot, Harvey hasn’t completely shut the door on a start.

“Anthony might have a different view and he is a very persuasive person.”

Ryan was rapt with the effort of runner up Villami, who almost pulled off a major upset.

Let It Pour grabbed another stakes placing when she ran on from the rear for third while Golden Slipper winner Kiamichi was disappointing, fading to finish fifth and almost eight lengths from the winner.

“I was where I wanted to be but the slow pace doesn’t suit her style of racing,” Bowman said.

“But take nothing away from the first four, they were too strong today.”