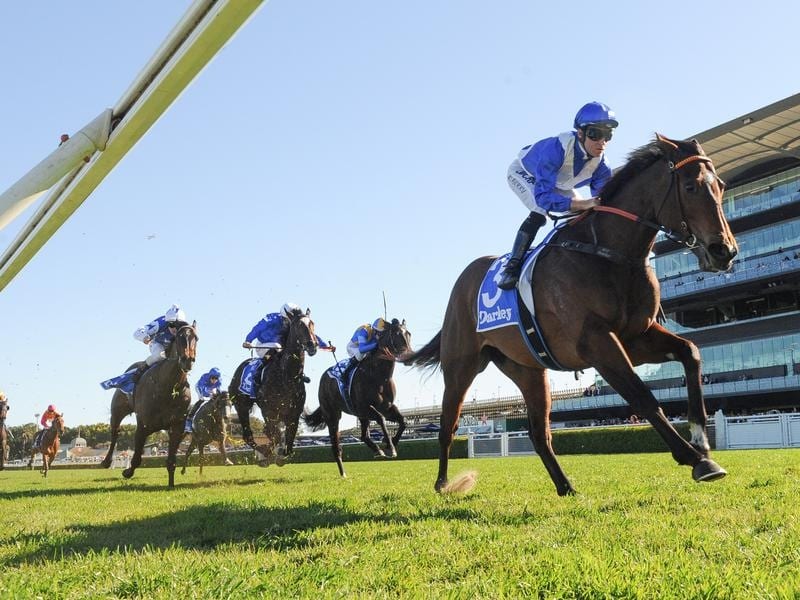 Libertini has made a successful return to racing with a clear-cut win in the Silver Shadow Stakes.

The return of boom filly Libertini was expected to be one of the highlights on Winx Stakes day at Randwick and the three-year-old didn’t disappoint.

Ridden confidently by Tommy Berry, the $1.50 favourite strode up to level with the leaders at the top of the straight then found another gear and careered away for a 2-1/4 length Silver Shadow Stakes win, which could have been even more decisive had Berry not eased her down on the line.

Clocking a class record 1:07.93 for the 1200 metres, Libertini earned high praise from Berry who has declared her the best filly he has ridden since 2013 Golden Slipper winner Overreach.

“There’s a few nice colts I’m riding at the moment but as for fillies, she’s the most exciting I’ve ridden since (a horse) like an Overreach going into the Slipper,” Berry said.

Raced by successful businessmen Gerry Harvey and John Singleton, Libertini is trained by Anthony Cummings who plans to progress her through the remaining three legs of the Princess Series which culminates in the Group One Flight Stakes.

Cummings said he wasn’t surprised by the dominance of her Silver Shadow performance, but he was caught off guard by the quick tempo of the race.

“Every time she runs she opens a new door,” Cummings said.

“That’s what was expected and that’s what she provided.

“She is that good and today’s another step in proving that.

“I didn’t expect the race to be run as quickly as it turned out to be but she’s that adaptable it doesn’t really matter.”

Libertini’s win prompted the TAB to more than halve her price for the $14 million The Everest from $26 to $11, even though the race hasn’t been discussed by her connections.

Cummings said the Everest wasn’t on the agenda but he always remained open-minded.

“If someone came knocking, I suppose you look at every opportunity but I’d have to have a chat to Gerry about that, we’ve not discussed it,” Cummings said.

Godolphin’s Flit ($8) finished best of the chasing brigade, a nose ahead of Let It Pour ($13).