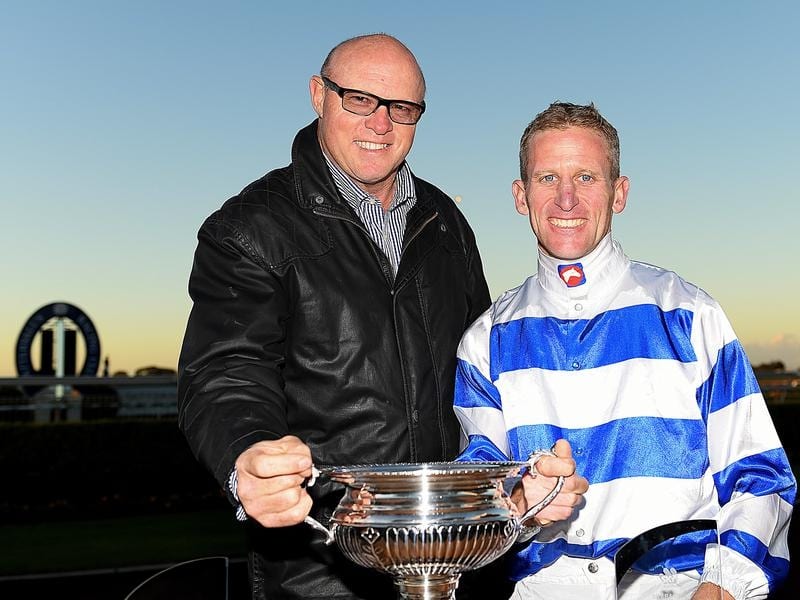 Brisbane trainer Liam Birchley (left) has been cleared by VCAT in the “Aquanita Eight” case.

Queensland trainer Liam Birchley has been cleared over the “Aquanita eight” doping case, but three other trainers including Robert Smerdon have lost their appeals against their disqualifications.

The Victorian Civil and Administrative Tribunal on Friday found Smerdon, Tony Vasil and Stuart Webb guilty but on a reduced number of charges.

Eight people associated with thoroughbred management company Aquanita Racing were disqualified over the conspiracy to cheat in more than 100 races over seven years, using top-ups of sodium bicarbonate and Tripart paste.

VCAT deputy president Heather Lambrick said in her judgment it was irrefutable on the text evidence of exchanges between Smerdon and stable employee Nelligan that the trainer was involved in the topping up of horses.

“It is abundantly clear on the face of the many text messages that Smerdon regularly asked Mr Nelligan to top up horses,” her judgment said.

But the number of occasions over which Smerdon was found guilty was reduced to 78, from the 115 before the RAD Board.

She found Vasil breached the rules of racing on two occasions, down from seven, and Webb on one instead of three.

Lambrick also said although she concluded Birchley was aware of “top ups” she could not be satisfied any administration took place regarding any of his horses.

Birchley, who was banned for one year by Victoria’s Racing Appeals and Disciplinary Board, has been training on a stay of proceedings in Queensland and Victoria but barred from racing horses in NSW while the case has been ongoing.

Late last month Birchley wrote to his owners saying he intended to step down from training to take on a new role at his Archer Park complex, a spelling and training facility.

He said the changes would take effect from September 30 when he would concentrate on developing Archer Park and building the bloodstock side of the business.

The RAD Board banned Smerdon for life while Webb was outed for four years and Vasil for three.

VCAT has scheduled an administrative mention on October 15 to determine the next steps in the case, but that means the parties have to respond to the tribunal rather than appear on that date.

RV said on Friday night it welcomed the Tribunal’s decision to find Smerdon, Vasil and Webb guilty of “serious offences that have undermined the integrity of the sport”.

“We acknowledge the Tribunal’s decision regarding the appeal by Liam Birchley and, having just received notification of their decision, we will now take our time to carefully review the judgment before considering our options,” RV said.