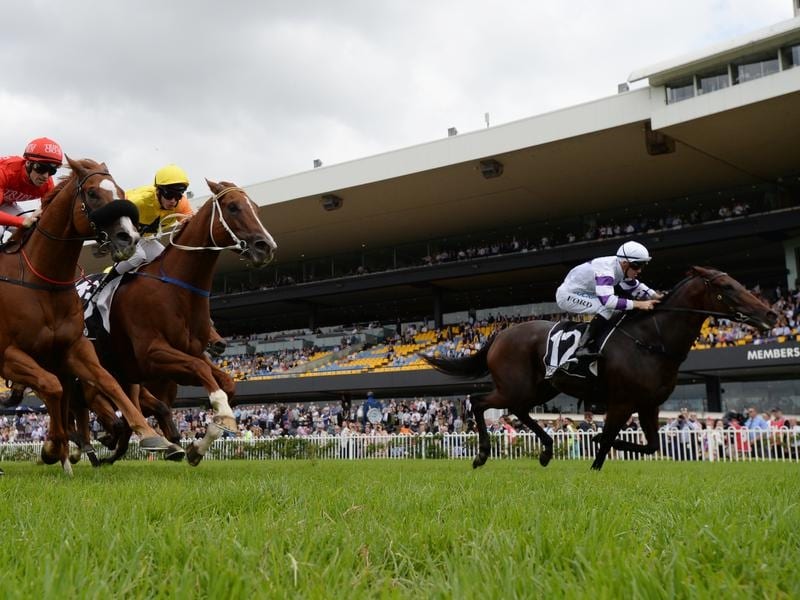 Spright (right) is an easing favourite for the Group One Goodwood after drawing the outside barrier.

NSW-trained mare Spright is an easing favourite for The Goodwood at Morphettville in Adelaide after drawing the widest barrier.

A field of 16 has been declared for Saturday’s Group One sprint over 1200m, a race won last year by Santa Ana Lane and which has Black Caviar on its honour roll.

Spright landed her first Group One victory in the Sangster Stakes at Morphettville on May 4 after previous Group One placings in the Moir Stakes and the William Reid Stakes, both at Moonee Valley.

Damien Oliver again rides Spright after partnering the mare when she came from second last on the turn to claim the Sangster.

Soon after the field was announced on Tuesday, Spright was the $3.20 favourite and has since drifted to $3.40.

Fellow Group One-winning mare Booker, who will carry the number one saddlecloth sharing topweight with Spright on 56.5kg in the set-weights and penalties race, will jump from barrier 15.

Third favourite at $7 pre-draw, Booker is now equal fourth favourite at $9, sharing that line with the Richard Laming-trained Jamaican Rain who drew barrier 11.

Iconoclasm has also been easy drifting from $5.50 to $7 second favourite, a line he shares with the Tony McEvoy-trained Cool Passion.

To be ridden by Barend Vorster, Cool Passion was a $12 chance soon after drawing barrier two, but has met with solid support since.