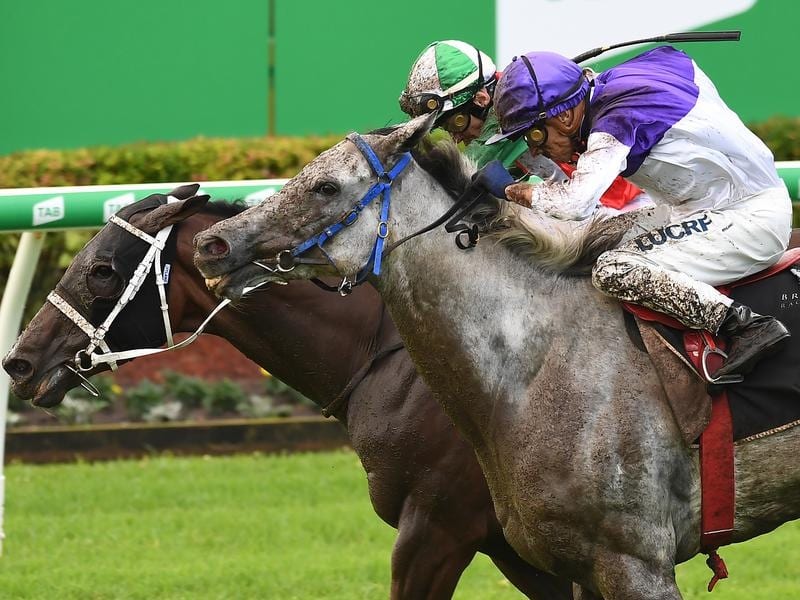 The Candy Man (right) has won four races since coming back from surgery on a broken jaw.

Stewards abandoned the final two races at the Doomben meeting after they found there were risks with visibility following rain falling all afternoon.

After race seven, the Mick Dittman Plate, senior jockeys Jeff Lloyd and Matt MCGillivray went to stewards and raised concerns about the track.

“We spoke with all 10 jockeys who rode in the Dittman Plate and four said they would ride on but would go with the majority,” Lloyd said.

“The problem is the kick back and some jockey can’t see.”

After hearing submissions from jockeys stewards ruled the last two races should be abandoned.

Chief steward Peter Chadwick said he wanted to make it clear it had been the stewards decision.

“We can’t be satisfied of jockey safety in a field of 14 from the 1600m shute in these conditions,” Chadwick said.

Earlier, comeback galloper The Candy Man again showed how wise it was to spend thousands of dollars saving him from a serious injury when he scored a fast-finishing win.

Ironically it was trainer Barry Baldwin was on crutches to welcome back The Candy Man ($4.40) who came from last to win the Big Difference Consulting Handicap (1600m).

“I have had a hip replaced, so I have been getting around on crutches. It is a nuisance but coming good,” Baldwin said.

The gelding’s career looked over when he shattered his jaw but owner Lucky Pippos shelled out the money for The Candy Man to have a nine-hour operation to save him.

The Candy Man has thanked his connections by winning four races since coming back and is now headed to a staying career.

“His brother won at 2400m and I think The Candy Man can go on to be a well above average stayer,” Baldwin said.

“Well that answers that question about the wet track. I was genuinely worried about it because his three-quarter brother Double Superlative can’t go a metre in it,” Schweida said.

Meet Mr Taylor has now won six of his seven starts and Schweida is eyeing some of the stake races during the winter.

The gelding trialled without blinkers last month when he was well beaten but wore them in the race on Saturday.

“He is pretty smart and the blinkers do make a difference,” Schweida said.