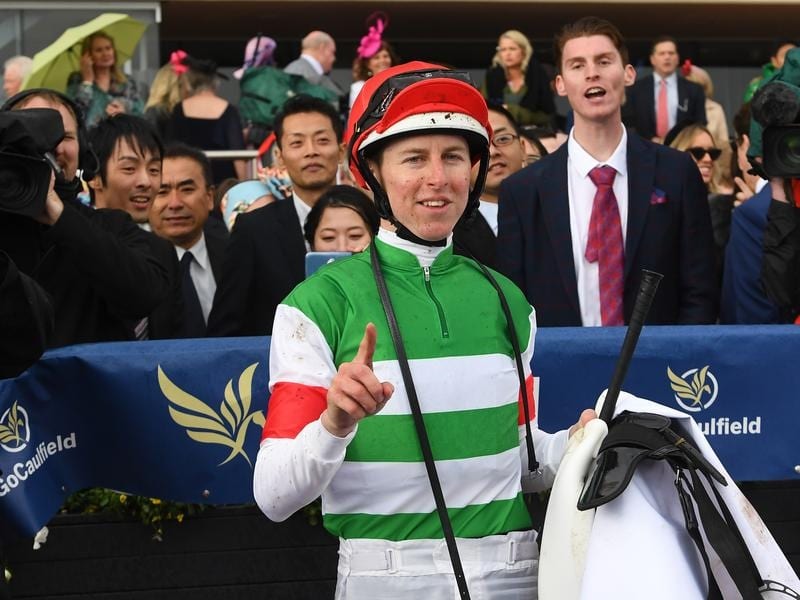 Caulfield Cup-winning jockey Damian Lane is in the box seat to add the Cox Plate on Lys Gracieux.

After claiming his first Caulfield Cup, star jockey Damian Lane is confident Lys Gracieux is the right horse to give him victory in another of Australia’s feature races, the Cox Plate.

But the fact so many others are anticipating the dual Group One-winning Japanese mare will prove superior in Saturday’s 2040m weight-for-age feature at The Valley also has Lane a little wary.

Lane rode Japanese horse Mer De Glace to an impressive win in the $5 million Caulfield Cup on Saturday and well-performed Lys Gracieux is the favourite to take out the Cox Plate.

“I guess the weight of expectation is getting a little concerning,” Lane said.

“Normally when things seems too good to be true, they are.

“It’s never easy to win these sorts of races, so she’s going to need luck on the day and she should be running well.”

Lys Gracieux is one of three international invitees who are set to compete in the Cox Plate along with fellow Japanese horse Kluger and English-trained Danceteria.

Champion Irish trainer Aidan O’Brien also has Magic Wand in the field which adds to the international flavour of the race in the first running since the retirement of Winx who won the past four,

A winner of the Takarazuka Kinen at Group One level in Japan in June at her most recent start, when ridden by Lane, Lys Gracieux drifted from $3.20 to $3.60 for the Cox Plate after drawing a wide gate on Tuesday but remains a clear favourite over Tasmanian mare Mystic Journey who is at $6.

Lys Gracieux will jump from barrier 11 of 14 if all four emergencies fail to gain starts.

Lane rode Lys Gracieux in a gallop at The Valley last Wednesday and said she handled it well.

“She’s a top-quality mare and she seems in very good order,” he said.

Lys Gracieux’s trainer Yoshito Yahagi has been pleased with the mare’s build-up.

“She’s had her last gallop this morning and I think she’s feeling even better than what she was in Japan. So we’re very happy,” Yahagi said through an interpreter.