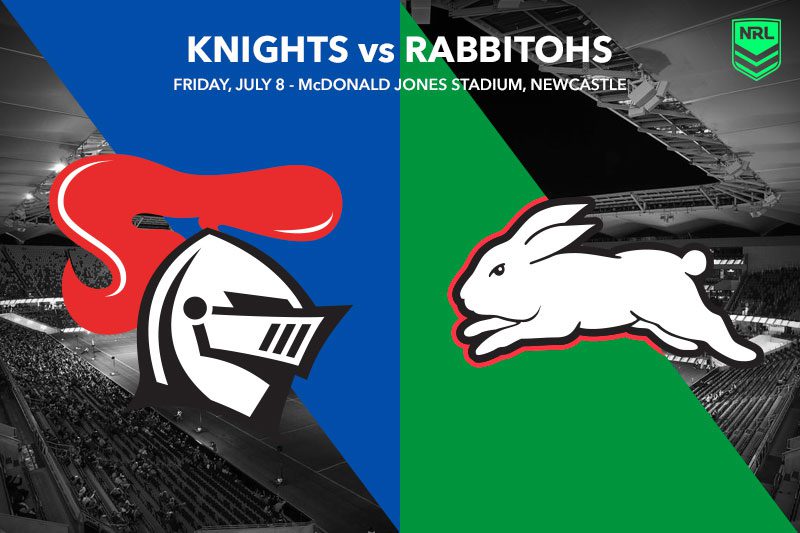 The South Sydney Rabbitohs face an enormous test on Friday night when they travel to Newcastle to take on the Knights in round 18 of the 2022 NRL Premiership.

Newcastle are fresh off their biggest win of the year in which they ran in eight tries against the Titans, while Souths’ depth will be put under pressure in what is another must-win game if they want to feature in finals football.

The Knights broke the shackles last weekend, and even if it was against a Titans team who appear destined for the wooden spoon, they should take some confidence from the performance.

The forward pack put in a massive shift and some guys who had been short of a gallop roared back to life, so can they do the same to a Souths team who have big question marks over their bench?

Newcastle are the outsider at home again at $2.45 with BetOnline, but with Souths missing so many key players, there is a little bit of value at the +4.5 line. It’s a week later than expected but Jayden Brailey will return from his Achilles injury to provide a huge boost to the spine, and as a result the whole attack should flow with his crisp service.

With no Campbell Graham in the Souths lineup, Edrick Lee could run in another bag of tries. Lee got five as a result of the Knights’ relentless assault down Gold Coast’s right edge, and Newcastle could keep going that way until the Rabbitohs are forced to figure out a solution. The $7.25 on offer for Lee to get another double is fantastic value.

South Sydney’s final 17 will look different to what is currently on the team list. Mark Nicholls has also been ruled out, which will mean new recruit Daniel Saluka-Fifita almost certainly plays. Even if he does come into the side, their bench is extremely small with both Blake Taaffe and Kodi Nikorima slated to play, which leaves them a forward short against a big Newcastle team. Does Jason Demetriou drop one of them and call on Shaq Mitchell to add that bulk, or does he take a huge gamble with a smaller line-up?

Shaq’s brother Latrell has enjoyed a fruitful time against Newcastle in his NRL career, and he shapes as the key man if the Rabbitohs are to get the chocolates. He is just $2.35 to score at any time, but he hit the ground running against the Eels in his return game, and knowing he will have to play an even bigger role could bring out a classic Latrell Mitchell game.

Alex Johnston is going to score his usual try, so include him in your multi, but Taane Milne might be the value pick of the outside backs at $3.75.

With no Graham, Nicholls, Cameron Murray, Damien Cook, or Jai Arrow available to play, the $1.55 for the Bunnies in the head-to-head market feels a little short and could drift during the week. It could pay to wait and see the final team list prior to kickoff before backing the Rabbitohs.

Latrell Mitchell is the most important player in the South Sydney backline. When he plays, they can run up a score on anyone. Tex Hoy has done a good job when called upon to deputise for Kalyn Ponga, but can he be one of the more influential players on the field in a game that is going to demand he matches whatever Latrell does?

South Sydney win at the 1-12 margin. Their record in Newcastle over the last decade is superb, having not lost there since 2011. Latrell Mitchell scores a double.