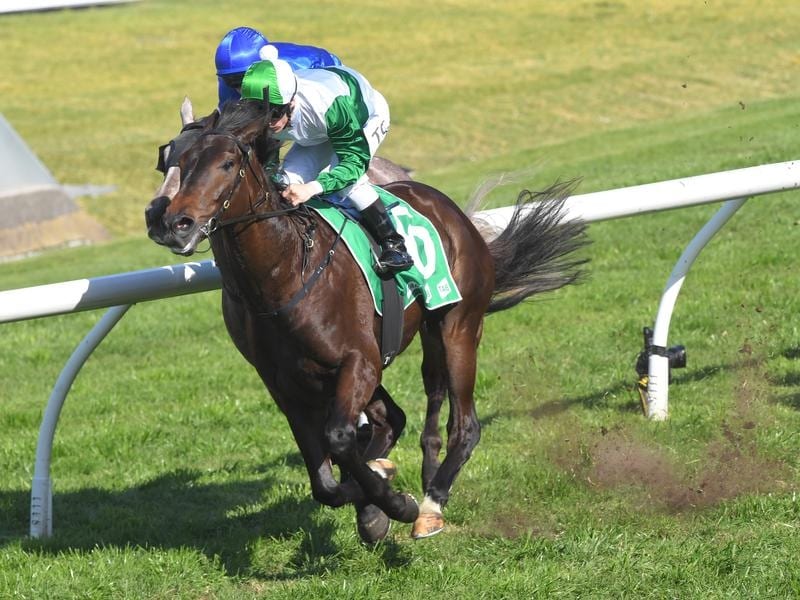 Just Thinkin’ will put his staying credentials to the test in the Group One Spring Champion Stakes.

Adrian Bott is confident a character-building experience in the Gloaming Stakes has laid the foundation for Just Thinkin’ to emerge as the dark horse in the Group One Spring Champion Stakes at Randwick.

Gloaming winner Shadow Hero is considered to have Saturday’s 2000 metre race at his mercy after backing up an eye-catching return behind Just Thinkin’ in the Dulcify Quality with an explosive last-start win.

Bott agrees the Mark Newnham-trained favourite is the horse to beat but he also expects Just Thinkin’ to take enormous benefit from his Gloaming Stakes effort when he travelled close to a strong speed and fought gamely for fourth.

“There was plenty of pressure on in that race from the outset and I’d like to think that’s a run that well and truly sets him up for what’s always going to be a tough test for them over the Randwick 2000 metres,” Bott, who trains in partnership with Gai Waterhouse, said.

“That should have him well conditioned and seasoned.

“We’ve made some small gear changes. We’ve put the blinkers on which we’ve kept up our sleeve for a while and hopefully that’s to his benefit on Saturday.”

Just Thinkin’ is a three-quarter brother to Thinkin’ Big who started favourite for Tulloch Lodge in the corresponding race last year, finishing third to the Newnham-trained Maid Of Heaven.

The latter also has a family connection to Saturday’s edition with her half brother Castelvecchio taking his place in the field.

The family links could grow in significance if the forecast for heavy rain in Sydney eventuates.

Odds-on fancy Shadow Hero is untested on rain-affected tracks, as is Just Thinkin’, but Bott is buoyed by the fact both Thinkin’ Big and full brother Stampede have won on wet ground.

“The only confidence we can take is he’s had some exposure through trials and the rest of his family has performed very well in heavy conditions,” Bott said.

“Stampede has been excellent, Thinkin’ Big was able to win well in the heavy conditions and (owner) Peter Dunn tells me his mum was also very effective in the wet.”

The Spring Champion Stakes has a rich history and is invariably a key pointer to the major staying races in Melbourne.

Ace High (2017) and Monaco Consul (2009) both won the Spring Champion Stakes-Victoria Derby double, while three years ago Yankee Rose followed her Spring Champion victory with a third to Winx in the Cox Plate.

Shadow Hero is a clear-cut top pick in early Victoria Derby markets and Just Thinkin’ was also expected to take a Classic path.

But Bott indicated the gelding could just as likely bypass the Melbourne spring and join stablemates Dawn Passage and Yao Dash in the paddock.

“He’s probably still another preparation away from being the finished product so it might be a case of, if he’s able to achieve what we hope he can, it would be a nice way to finish off a campaign and give him a proper spell and a good way to come back and attack an ATC Derby,” Bott said.