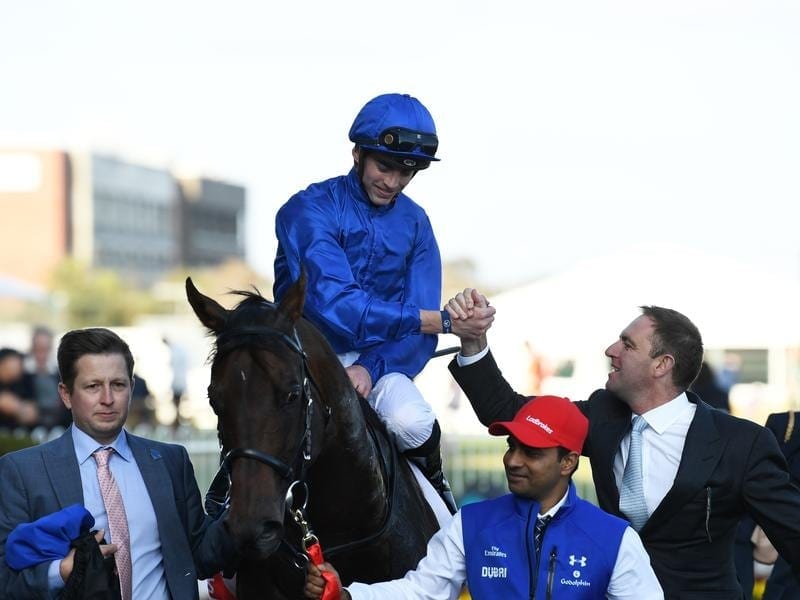 Jungle Cat has struck the first blow for the international contingent in Melbourne for the spring.

A long-range plan has come to fruition with international visitor Jungle Cat winning the Group One Sir Rupert Clarke Stakes at Caulfield.

UK-based Godolphin trainer Charlie Appleby has had plenty of success at Australian carnivals in the past three years and sent a team of three horses to Melbourne earlier than usual this year for early spring targets.

Racing for the first time since winning the Group One Al Quoz Sprint in Dubai in March, Jungle Cat had to pull out all stops in the straight under James Doyle to win in a three-way finish to the 1400m race.

Jungle Cat ($13) got his head down on the line to win by a half-head over a gallant Dollar For Dollar ($21) while Land Of Plenty ($5) was another short half-head away after a wide run.

“It was always our plan straight after the Al Quoz to come here,” Appleby said.

“Group Ones over seven furlongs in Europe are few and far between and generally they are in France and the ground is usually on the easy side which doesn’t suit him.

“He loves to hear his feet rattling. This was always the plan to come here and it’s nice when it comes off.”

It was the eighth winner for Appleby over the past three spring carnivals in Victoria and the first at Group One level in Melbourne to go with Polarisation’s Group One win in the 2017 Sydney Cup.

Appleby praised the team who travel with the horses and said it was a fantastic result for everyone.

And he was thrilled for Jungle Cat who added to his Group One win in Dubai having contested a number of big sprints in Europe during his career.

“He’s danced every dance back in Europe at Group One level and is always thereabouts,” he said.

“He deserves his Group Ones. He’s been consistent his whole life.”

The win was a first Group One in Australia for UK-based Doyle who jetted in on race morning.

It continued a big year for the jockey who credits a stint in Sydney for Godolphin during the 2016-17 season as taking his riding to a new level.

“Coming here I felt a couple of years ago has done wonders for my career,” he said.

“It really sharpened me up and made me a better jockey.”