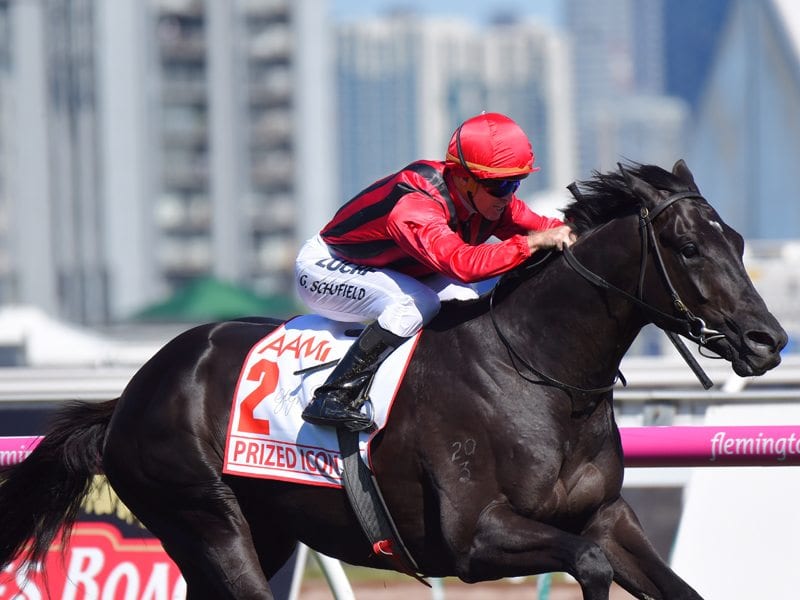 The Cummings name is attached to some of Australia’s most famous races, and the latest generation has ensured it will be so for many years to come.

James Cummings has become the fourth generation to train the winners of the Victoria Derby, with Prized Icon upsetting New Zealander Sacred Elixir in the blue-riband Myer Classic at Flemington on Saturday.

The 28-year-old remained calm and collected as he vowed to ensure the Cummings name would be around for a long time.

“Most of Australia knows the name,” Cummings said.

“I reflect on it but right now I’m proud of the horse and the job he’s done.

“He’s been a model of consistency throughout his career and (jockey) Glyn Schofield has been a part of that.

“The horse was just in his own comfort zone and happy in his own space and he was strong.”

Prized Icon ($17) was 2-1/2 lengths too strong for $2.70 favourite Sacred Elixir, whose trainer, Tony Pike, was disappointed, believing he had hit the front too soon.

“He was just too good today,” Pike said.

“I told James when (Prized Icon) won the Champagne Stakes in the autumn he was a Derby horse, and it doesn’t always work out but it did today.”

Pike said Sacred Elixir would bounce back for a Sydney autumn campaign.

“He possibly over-raced a couple of times in the run but not too badly,” he said.

“Zac, I think, was worried about getting held up by the horse coming around him three-deep.

“He had a decent old bumping duel with it on the corner, and both him and Swear probably landed in front together at the top of the straight and he had to sit and wait for a fair while.

“But he’s probably better just coming into it the last couple of hundred metres.

“That’s it for him this prep. He’ll go home and have a spell and head to the Championships in Sydney.”

The winning trainer was surrounded by family, including his father, Anthony, who trained the 2012 Victoria Derby winner, Fiveandahalfstar.

James Cummings trained in partnership with his grandfather Bart until the master trainer’s death in 2015.

Bart Cummings trained five winners of the Victoria Derby and his father, Jim, trained one, Comic Court, which won in 1948 and went on to win the Melbourne Cup.

That race is unlikely for Prized Icon, which is raced by Eduardo Cojuangco, the grandfather of James’ wife, Monica.

Anthony Cummings was also on hand to celebrate the win after a tough couple of days in which a family dispute over his later father’s will became public.

“James has made a great start to his training career and continues on the family name.”

There were few excuses for the beaten brigade, with Inference (9.50) 1-1/4 lengths from Sacred Elixir, and many of the others struggling over the 2500m.