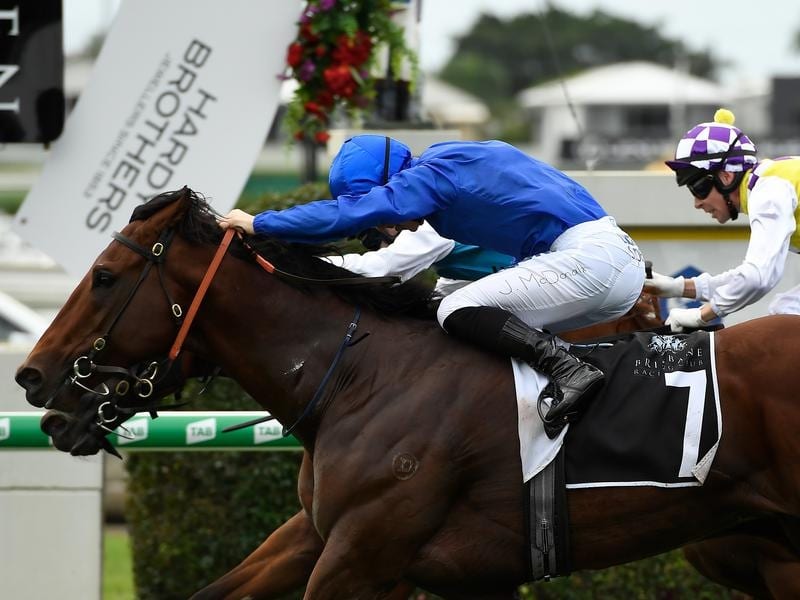 Isaurian has scored a last-stride win at Doomben to enhance a perfect record when resuming.

Godolphin galloper Isaurian had to fight hard to maintain his unbeaten first-up record in the Listed Chief De Beers Quality (1100m) at Doomben.

Isaurian ($2.10) looked certain to be beaten by outsider Straturbo ($51) but lunged on the line to score by a short half-head.

It was the fourth time in four first-up runs that Isaurian had greeted the judge first.

Trainer James Cummings believes there is more to come for Isaurian, a well bred four year old by top sire Exceed and Excel, this winter.

“We brought him up here to get some black-type and he has done that now. He is a pretty handy horse and I think we will leave him here,” Cummings said.

“There are some races coming up which will suit him including the Moreton Cup (at Doomben on June 1). After that we can look a bit further.”

Jockey James McDonald said Isaurian had begun very well but got back a bit further than expected after that.

“He really had to dig deep in the final 50m but he got there,” he said.

The unlucky runner of the race was In Good Time ($25) who finished third after having trouble getting a clear run in the straight.