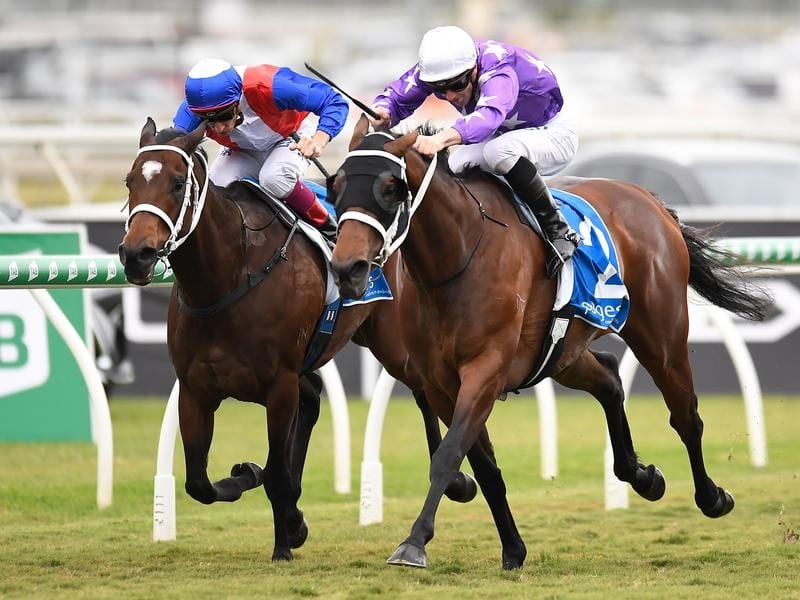 Invincibella (right) has given James McDonald a first and Chris Waller a record 18th Group One win.

Collett held his nerve when Invincibella ($10) was bumped by runner-up Pohutukawa ($5) in the straight before showing enormous courage to win by a short half head.

For Waller, Invincibella gave him his 18th Group One win for the season, eclipsing the previous record of 17 set by legendary trainer Tommy Smith in 1979-80.

Emotions bubbled over for Colless as the realisation of winning his first Group One race sank in.

“It’s an unbelievable feeling,” he said.

“It’s been a long time coming. When Pohutukawa come to me at about the 300 metres I thought ‘ah no, another second’.

“She copped a fair bump in between them but she managed to pick herself up and out-tough them.”

Waller was represented by his Gold Coast foreman Paul Shailer who admitted the pressure was on to deliver a Group One success during the winter carnival.

“We’ve been all around the mark and unable to crack one but it’s a good way to end,” Shailer said.

Waller’s achievement was not lost on Shailer who praised the work ethic of his boss.

“It goes down to how much of a hard worker he is and the dedication and time and effort he puts into his horses,” he said.

“No stone is left unturned and there’s no one more deserving.”

Shailer said Invincibella’s Group One success was well deserved in the twilight of her racing career.

“It’s eluded her for a long time but I think today she bounced off the back of her last run which was very good and gee she was tough today so there was no more horse deserving than her,” he said.

Jockey Blake Shinn was full of praise for the effort of Pohutukawa against such a “hard and tough mare”.

“It was a very brave effort and I’m very proud of my horse,” he said.

“I think she’s got a great career ahead of her and I think she’s destined for a Group One success in the near future.”

Tommy Berry said Savatiano fought on bravely for third but was unable to hold the first two placegetters at bay.

“We had a great run in the race but I just think he first two across the line ran out the trip a bit better than we did, but she was tough in defeat,” Berry said.