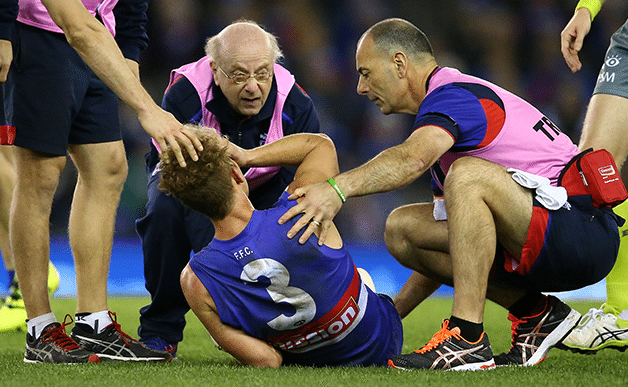 THE Western Bulldogs’ odds of winning the 2016 premiership have taken a huge hit, moving from $9 to $15 at Sportsbet.com.au.

The Dogs are also no longer expected to push for the top-four either after losing key players Mitch Wallis to a horrific broken leg and Jack Redpath to a season-ending knee injury in Saturday night’s soul-crushing loss to the Saints at Etihad Stadium.

Luke Beveridge’s men have seen their double chance odds blow out from $1.95 to $4.50 in the space of a week.

To compound matters further, dependable defender Dale Morris is no certainty to take his place for this Friday night’s crucial clash against Geelong after sustaining a leg injury which saw him miss the second half of Saturday night’s loss.

The injury-ravaged Dogs will go into Friday night’s clash against Geelong without six of their best 22 if Morris and Jake Stringer (who missed last week with a shoulder injury) are unable to shake their injury concerns.

“I think at all football clubs players are tight and ours is no different.” Beveridge said.

There were concerns the medical staff at the Western Bulldogs did not do their due diligence after Redpath was allowed to take to the field after suffering a knee injury early in the match.

The burly forward subsequently ruptured his ACL, bringing back memories of Bulldog midfielder Clay Smith – who was similarly allowed to retake the field after sustaining the same injury back in 2015.

Beveridge revealed in the post-match the injuries were unrelated.

“All the clinical tests showed that his knee was stable and he just had a jarring incident,” he said.

“The one where he has done his ACL is one of those innocuous change of direction type movements.”

The news may be dire for the Dogs, but everything is coming up rosy for the Hawks.

The Hawks ($3.30) are now the clear pick at the top of the premiership market at WilliamHill.com.au.

The reigning premiers are also the $1.30 favourites to win the minor premiership, a feat they have only achieved once across their three year period of dominance.

Despite being heavy favourites for a fourth flag in as many years, Hawthorn coach Alistair Clarkson said his club ‘couldn’t give a toss’ about the premiership favourite tag heading into the latter stages of the season.

“We weren’t in grouse form this time last year, either, and nor the year before that,” Clarkson said.

“Everyone in the media wants to declare a premiership favourite every week, and it’s great for the viewers and listeners and readers.

“But for those who are in the game, we couldn’t give a toss who is premiership favourite at this point in time — it’s who’s playing the best footy in September and early October.”

THE Saints and the Kangaroos’ Saturday night clash at Etihad Stadium could decide which of the two teams takes the final spot in the finals.

The ninth placed Saints shocked the Dogs on Saturday night to move within two games of the eight placed Roos, who kicked away late in the contest to beat Collingwood by 40 points on Friday night.

North Melbourne gained a much needed percentage boost out of the contest, and sit 20 per cent above St Kilda.

The Saints are the $2.41 outsiders on Saturday night, but a victory at Etihad Stadium would see their odds of $6 to make the eight come in significantly.

North Melbourne will go in as the $1.35 favourites on Saturday night.

Brad Scott’s men are at the extremely short price of $1.14 to retain their position inside the eight.

St Kilda coach Alan Richardson said their win against the Dogs proved the Saints have what it takes to overcome the pressure of expectation.

“It was a really positive result because of the conversation (that) if the Saints keep winning and the Kangaroos slip up, we might be a chance to sneak in,” he said.

“And with that expectation, that noise, that pressure, I was just so pleased that the players were able to play really strong, bold footy and didn’t let the occasion affect them negatively in any way.

“In fact, I think it did the opposite. It was a real positive.

“They embraced the challenge and they want to be in this space, in this conversation.”

While the Saints have given themselves every possible opportunity to force their way into the finals, Richardson conceded the final result may be out of their hands.

“We’d rather be more advanced where we’re not relying on others to lose and we acknowledge we still need a fair bit of luck.

“But all we can do is control what we can control and that’s to play strong footy against whoever we come up against.”

The only other team in the top-eight market is Port Adelaide, but the market is not expecting the Power to overturn a 12 point deficit this late in the season.

Port Adelaide’s loss to the Giants at home on Sunday afternoon for all intents and purposes ruled them out of the finals picture.

Sportsbet has placed the Power at $21 to make the final eight in 2016.