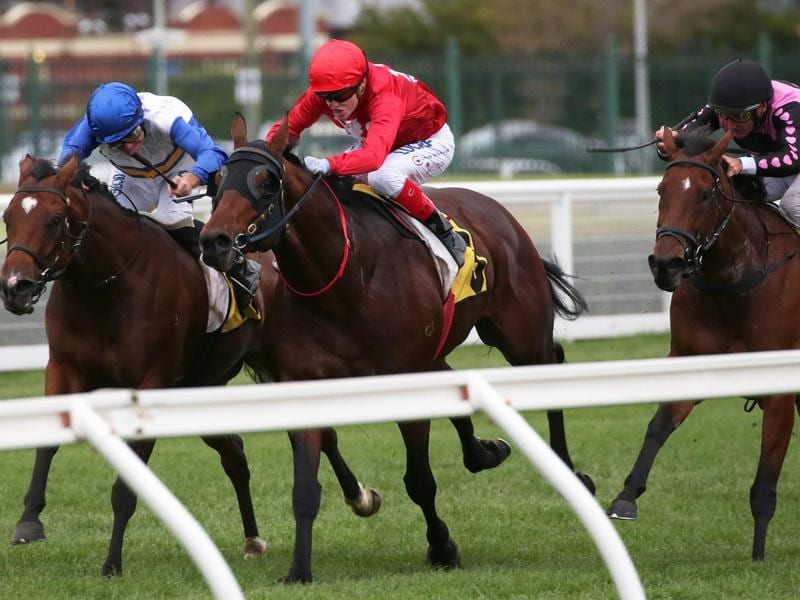 Last-start Caulfield winner Iconoclasm (red) will head to Adelaide for the Group One Goodwood.

Trainer Danny O’Brien is looking at an interstate Group One double with stable newcomer Iconoclasm beginning with The Goodwood at Morphettville.

The Melbourne trainer is sending Iconoclasm to Adelaide for Saturday’s Goodwood before taking him north to Brisbane for the Stradbroke Handicap at Eagle Farm on June 8.

A former member of disqualified trainer Darren Weir’s team, Iconoclasm has had one start for O’Brien, winning the VOBIS Gold Sprint at Caulfield on April 29.

O’Brien said Iconoclasm was in great order ahead of his assault on The Goodwood (1200m).

The Flemington trainer is not expecting the three weeks between runs to be a disadvantage.

“He galloped at Flemington on Saturday morning and we’re expecting him to run really well,” O’Brien said.

“He’s had three weeks which is a good break between runs and he should be spot-on for next Saturday.

“The plan after Saturday is to then go to the Stradbroke which is another three weeks after with travel in between.”

Craig Williams, who rode Iconoclasm to victory at his debut run for O’Brien, has the ride on Saturday and said the four-year-old felt terrific after his gallop on Saturday.

Iconoclasm is the $6.50 second favourite for the Goodwood behind Sangster Stakes winner Spright at $3.60.

O’Brien is planning an assault on Brisbane’s carnival with Grinzinger Star, Vow and Declare and Addictive Nature, all set to travel from Melbourne on Monday.

Grinzinger Star was scratched from Saturday’s South Australian Derby at Morphettville with a raised temperature.

“He had enough of a temperature that he couldn’t get on the float,” O’Brien said.

“There’s no ill-effects. I just didn’t want to risk him on the float.”

Grizinger Star and Vow And Declare are set to run in the Group Three Grand Prix Stakes (2200m) at Eagle Farm on May 25 ahead of the Group One Queensland Derby (2400m) on June 8.

O’Brien would like to run Addictive Nature in he Stradbroke Handicap but he will need to win Saturday’s Group Three BTC Sprint at Doomben to be assured of a start.