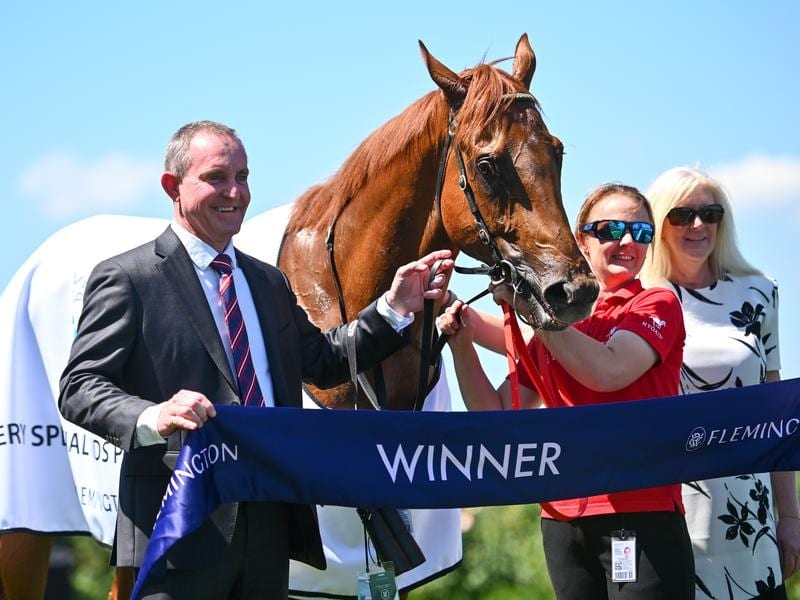 Trainer Greg Eurell admits Ilovemyself leaves big shoes to fill in his stable, with the promising galloper set to do his future racing in Hong Kong.

Eurell confirmed the rising three-year-old, who won impressively on debut in a Listed race at Flemington in one of two autumn starts earlier this year, had been back in work for several weeks preparing for lofty spring targets before being sold.

“It’s a blow to the side, there’s no shadow of a doubt about that,” Eurell said.

“He was probably going to be the flag bearer for us leading into the spring.”

Ilovemyself burst onto the scene with his win in Listed grade over 1000m at Flemington in late February before being sent to Sydney to chase a potential Golden Slipper berth.

He was spelled after being unplaced in the Pago Pago Stakes.

“We were looking forward to some pretty bright races with him but in fairness I think it was an extremely good offer and (owner) Neville (Murdoch) decided to take it,” Eurell said.

Eurell believes Ilovemyself will be a success in Hong Kong as the horse has a great temperament and an abundance of ability.

The trainer hopes other horses can step up to help fill the void starting on Saturday at Flemington where he has three runners, including two-year-old Ilovethegame who races in the same colours as Ilovemyself.

Ilovethegame won on debut at Sandown on June 17 and is set for Saturday’s 2YO Sprint Series Final (1200m) in which Eurell believes he will run well.

“He probably hasn’t given us that feel like Ilovemyself did but in fairness to him he can’t do any more than what he did when he kicked off his career,” he said.

“Certainly Saturday will give us a clearer picture.

“He came out of his first start really well.

“He’s benefitted greatly from that and his work has been spot on leading up to this.

“He’s a genuine racehorse. He’s not the size of Ilovemyself but he’s got the will to win and he has got ability.”