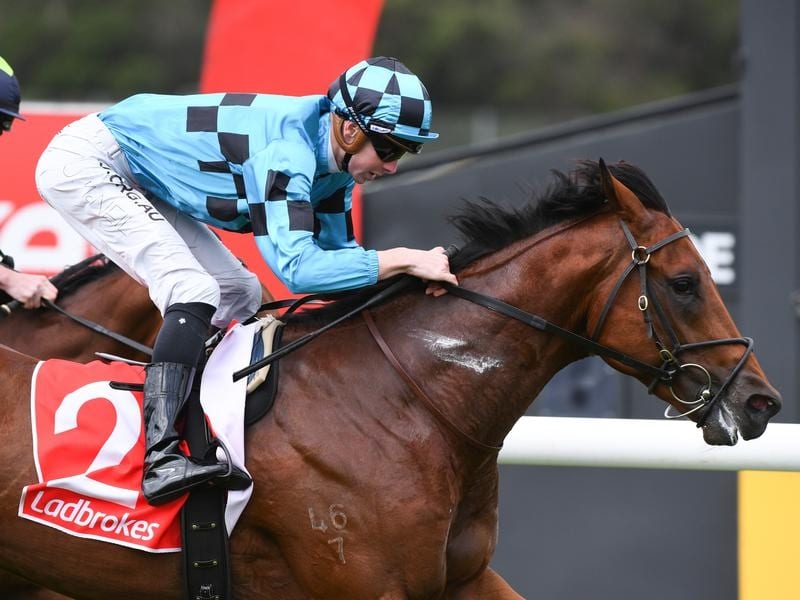 Holyfield emerged as a Champagne Stakes contender after keeping an unbeaten record at Sandown.

Holyfield has lived up to his name with a fighting victory at Sandown to remain unbeaten in two race starts.

Named after boxer Evander Holyfield, the two-year-old fought back after being headed in the Sandown straight on Wednesday to win the Ladbrokes Handicap (1400m).

The victory continued the success of Ciaron Maher and David Eustace in two-year-old races this season with the stable looking at bigger prizes with Holyfield.

Ridden by Jye McNeil, Holyfield, the $3.20 favourite, led and was headed by runner-up Drone Strike ($3.50) at the 200m before rallying to record a three-quarter length victory.

It was a victory that impressed Maher who said Holyfield was likely to return to his Sydney stable and be set for the Group One Champagne Stakes at Randwick in April.

Holyfield was successful at Newcastle over 1200m last month but was sent to Melbourne as there was a lack of 1400m races in Sydney for the colt.

“He’s a horse that we’ve taken the easier route with to bring him on and get him some confidence,” Maher said.

“He really improved out of his first-up win at Newcastle and I think he’s gone to another level again.

“We decided to bring him down here to give him the experience and we thought he’d grow up as well.

“I really think he could be a Champagne horse if he keeps progressing the right way.

“I love the way he conducted himself in the mounting yard.”

Holyfield was a $800,000 yearling purchase and is out of the Group One winning mare Hurtle Myrtle.

While Maher was a major buyer of yearlings last year who have progressed to form the backbone of his two-year-old brigade this season, Holyfield and the unbeaten Prague are owned by Aquis Farm and Phoenix Thoroughbreds.

“This horse wasn’t in my league and horses like Prague, they were bought by Aquis and Phoenix,” Maher said.

“They’ve been great supporters of the stable and it’s great to get these expensive colts to the races and be winners.

“Hopefully this horse can string a few together as he’s really well bred and out of a great mare.”

Maher and Eustace completed a double with Seatonic taking out the Ladbrokes Back Yourself Handicap.