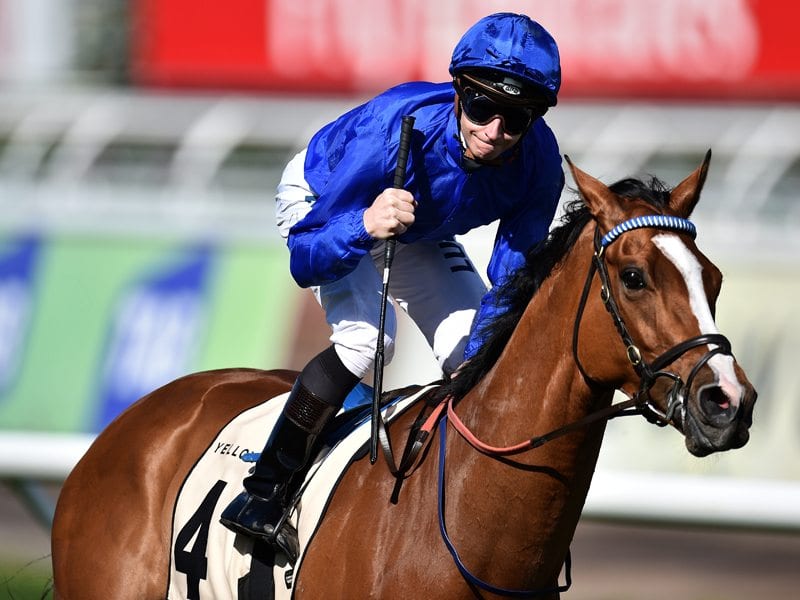 Godolphin star Hartnell (pic) will clash with Winx in the Cox Plate instead of racing at Caulfield.

The clash many racing fans have been hoping to see is on with Godolphin confirming Hartnell will run in the Cox Plate, setting up a showdown with Winx.

Godolphin will be represented in the Caulfield Cup on Saturday week by English horse Scottish, who is trained by Charlie Appleby, and the John O’Shea-trained Turnbull Stakes third placegetter Tally.

“We’ve discussed Hartnell’s next race with John Ferguson and the boss (Sheikh Mohammed) and the decision is that he will run in the Cox Plate,” Plumptre said.

“There’s no particular reason over and above the fact that we think it’s a nice race for him.

“We did that in case something went wrong with Scottish this week. It was purely to see if he gets over his trip OK.

“John Ferguson didn’t think there was much point in running Sheikh Mohammed’s best European stayer against the best Australian stayer in the Caulfield Cup and he wanted to split them up.”

The Melbourne Cup is also an option for Hartnell after the Cox Plate.

“Depending on what happens in the Cox Plate, we’ll see what happens after that race as to whether he goes onto the Melbourne Cup,” Plumptre said.

The decision leaves Turnbull Stakes runner-up Jameka as the new $3.70 Caulfield Cup favourite ahead of Scottish at $8.

Before Godolphin’s confirmation Hartnell would head to the Cox Plate, defending champion Winx was at $1.80 with Hartnell at $3.50.

Winx, who has her final Cox Plate lead-up against two rivals in Saturday’s Group One Caulfield Stakes, is now out to $1.90 with Hartnell at $3.

Hartnell is the $5.50 Melbourne Cup favourite.