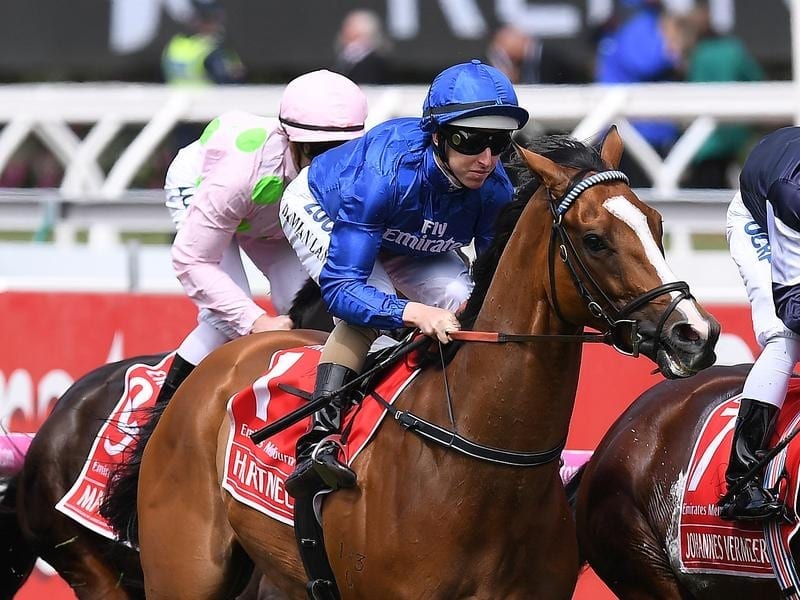 Epsom Handicap winner Hartnell has history against him in the Group One Toorak Handicap.

James Cummings is relying on instinct to run Hartnell in the Toorak Handicap, despite the Godolphin star needing to set a metric-era weight-carrying record to win the Group One race.

The last-start Epsom Handicap winner has 59kg, with no horse carrying more weight to win the Toorak since Tobin Bronze lumped the equivalent of 62.5kg in 1967.

Hartnell had also been nominated for the weight-for-age Caulfield Stakes (2000m) on Saturday’s program.

“It was a careful choice that we made to run in this rather than the Caulfield Stakes, but he’s responded so well to being kept to the shorter trips that I had to go with our gut feeling,” Cummings said.

Hartnell has 0.5kg more than Sir Rupert Clarke Stakes winner Jungle Cat in the capacity field of 18 plus one emergency, while he is giving up to 7kg to a host of rivals.

“He’s back up to 59 kilograms but I think that against those horses he’s very capable of being competitive with them at that weight,” Cummings said.

Hartnell will be re-united with jockey James McDonald in the Toorak for the first time since their Melbourne Cup minor placing in 2016.

McDonald rode Hartnell in 13 of his first 15 Australian starts when the gelding was trained by John O’Shea and McDonald was Godolphin’s stable rider.

McDonald returned earlier this year from an 18-month ban for a betting offence and he will be striving to add a third Group One win on Hartnell after combining with the import for elite-level wins in the 2015 BMW and the 2016 Turnbull Stakes.

Hartnell forms part of an outstanding book of feature race rides for McDonald.

He also rides The Autumn Sun, Smart Melody and D’Argento who are favourites in the Caulfield Guineas, Thousand Guineas and Caulfield Stakes respectively.