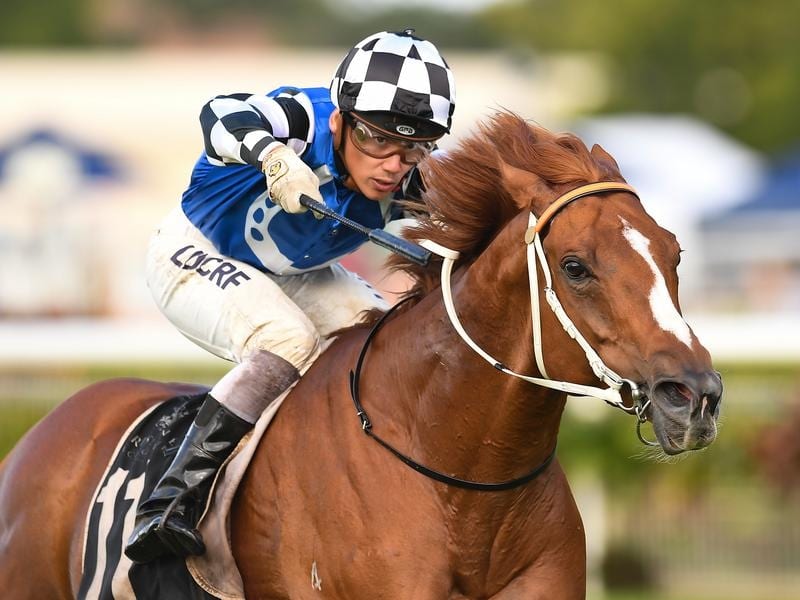 Matthew McGillivray on board Hallelujah Boy, who reveled in the wet conditions at Doomben.

Mudlark Hallelujah Boy’s runaway win at Doomben set him on a path to the winter carnival with one proviso – as long as the rain hangs about.

It was the biggest win for Newcastle trainer Kris Lees’s Gold Coast satellite stable since he set it up last year.

But stable representative Mel Eggleston said there would be a lot more winners to come and Hallelujah Boy could be one of them.

“I would love to win a race like the Wayne Wilson Memorial Mile next month. But really he would need a wet track to be competitive with some of the better horses,” Eggleston said.

“But for all that I thought he was close to a good thing today. He loves wet tracks and he was the only pace in the race.”

“I told Matt (jockey McGillivray) to lead and set the pace before kicking away on the turn. It turned out perfectly.”

Hallelujah Boy is one of many Australian Bloodstock horses trained by Lees.

“Kris is looking forward to a big winter and this is a good way to start,” Eggleston said.

McGillivray said he had been confident throughout once he was left alone in front.

“He had no trouble bowling along and we only had 54kgs,” he said.

Jockey Jeff Lloyd said Cool Chap had tried hard but the winner had too big a break on him.

Trainer Liam Birchley was happy with Fit For Purposes’ run and he will now press on to the Hollindale Cup at the Gold Coast in a fortnight.

“He really had a task the way the race was run but he hit the line well,” Birchley said.

Jockey Larry Cassidy said the favourite Order Again, who finished fourth, couldn’t pick his feet up on the heavy track.