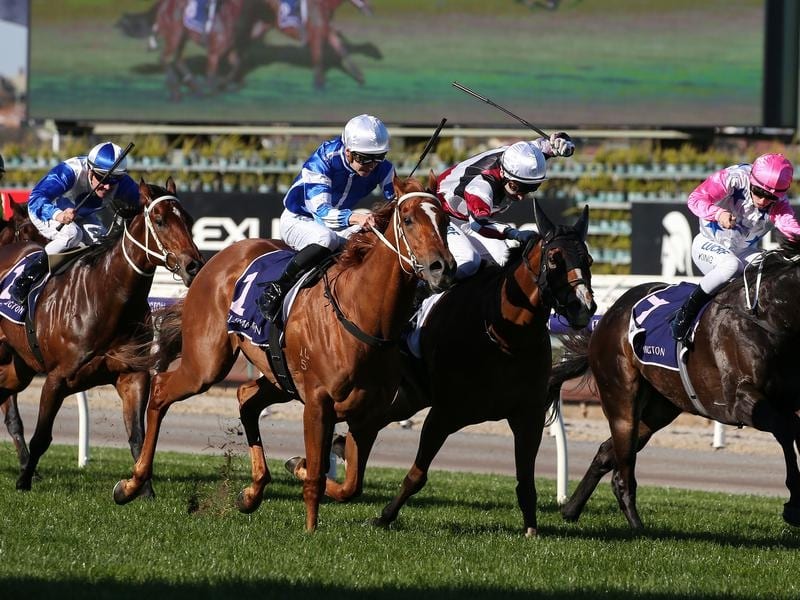 Gytrash (blue) is after consecutive Flemington straight-track wins in the Creswick Stakes.

Adelaide sprinter Gytrash has performed strongly in his two Melbourne appearances and his trainer Gordon Richards believes the three-year-old is on target to do so again in the A R Creswick Stakes at Flemington.

Gytrash runs in Saturday’s Listed 1200m-race against his own age having won at his first attempt on the straight course at Flemington over 1000m two weeks earlier.

The gelding’s only other Melbourne appearance was a close second to Group One winner Written By at Caulfield last September when he finished strongly.

A winner of three of his five starts this campaign, Gytrash has only missed a place once in his 12-start career and that was in the Group One Goodwood in Adelaide last month.

The Creswick Stakes, likely to be Gytrash’s last start of the preparation, came onto the radar for Richards after the three-year-old defeated Halvorsen last start.

He is hoping Gytrash will have benefited from that experience because he felt the gelding got lost mid-race before knuckling down to his task late to win.

“Three or four hundred metres out I thought he was in trouble,” Richards said.

“He came off the bit and I’m not sure he knew where he was coming down the straight.

“He was pretty impressive actually.

“If he remembers the straight track and that it doesn’t have a bend, I think he’ll run at least as well as he did the other day.”

Gytrash beat Halvorsen by a short head and meets him on slightly better weight terms on Saturday, which Richards hopes proves crucial.

Bam’s On Fire brings a different form reference having won her three starts this campaign including her past two against her own age and sex at Caulfield.