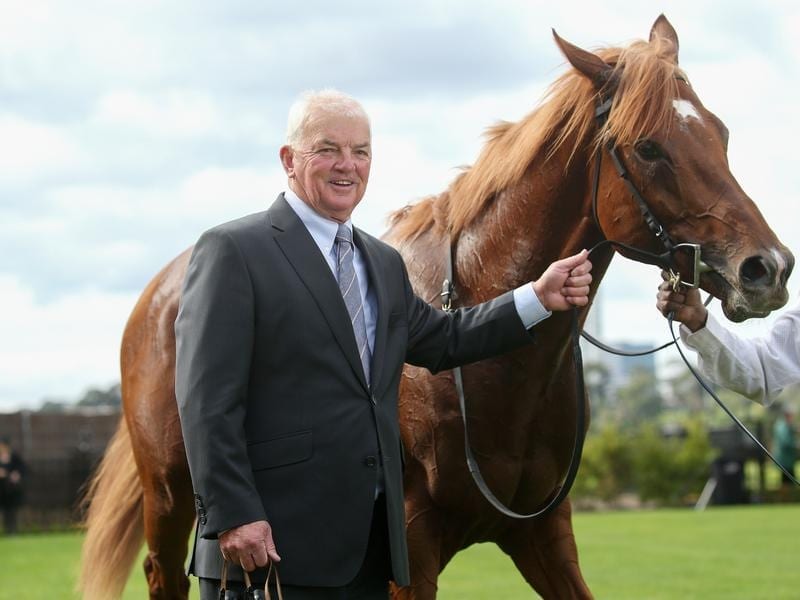 Trainer Colin Little will test Vassilator in blinkers at trackwork ahead of the Caulfield Guineas.

A poor performance in a lead-up race has not deterred Vassilator’s trainer Colin Little from pressing ahead to the Caulfield Guineas with the colt.

The three-year-old finished last in the Caulfield Guineas Prelude on September 30 and after undergoing a veterinary inspection will take his place in the Group One feature over 1600m on Saturday.

Vassilator is likely to have a gear change although that won’t be finalised until after he works on Tuesday.

Little has experimented with blinkers and different headgear in the past week in a bid to get the colt to settle.

At his last start Vassilator settled second-last and spent the majority of the race with his head pointing skywards.

“He drew barrier one which turned out to be the worst barrier,” Little said.

“He got right back to second-last on the fence with nowhere to go.

“He started over-racing, put his head in the air and lost all chance.

“He has had a little trait of flipping his head around before but not to that extent.

“We’ve been experimenting with gear on his head all week, a Kyneton nose-band, a crossover noseband as well as blinkers.”

Little said Vassilator galloped well on Friday at Caulfield and will work with a mate on Tuesday.

That gallop will determine whether Vassilator wears blinkers on Saturday and any associated head gear.

“We’ve used blinkers all week and they don’t make him over-race,” Little said.

“They’ve made him concentrate without over-racing so we’ll have to make that decision before acceptance time tomorrow.”

Little first began thinking of the Caulfield Guineas after Vassilator strung together victories at Flemington in April and May.

After two pleasing 1200m-runs, Vassilator was then stepped to 1400m for his last start at Caulfield.

When nominations closed for the race in August, Vassilator was a $26 chance but after his last start has drifted out to $101.

The Chris Waller-trained The Autumn Sun is the $2 favourite in latest markets ahead of Leonardo Da Hinchi ($7) and Native Soldier ($9).

The final field with barriers will be announced on Tuesday morning.