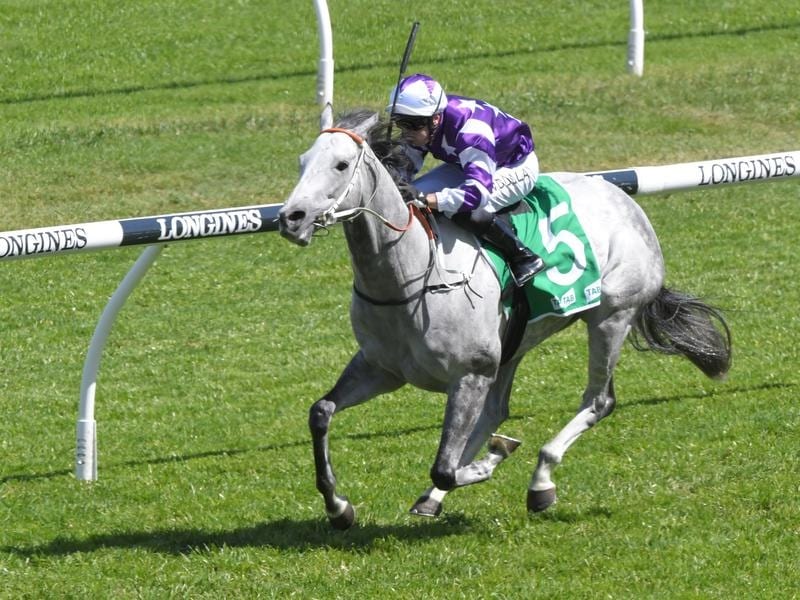 Greyworm has continued a purple patch of form with an easy win at Randwick on Bondi Stakes day.

Short-priced favourite Greyworm has scored a dominant wire-to-wire win for the Hawkes Racing team in the Filante Handicap at Randwick.

Sent out at $2, the five-year-old grey set the pace and dashed to a 1-1/4 length victory over fast-finishing John Sargent-trained mare Luvaluva ($8.50).

Luvaluva, returning from a five-month spell, ran on strongly as she prepares for the $1 million Gong at Kembla Grange next month, while Rancho Notorious ($20) held on for third another 2-1/4 lengths back.

But neither challenged Greyworm, ridden by Brenton Avdulla, as the pair raced clear at the 300m.

“He just jumped and went straight to the front. Nothing wanted to take him on.”

His victory at his previous start meant Greyworm would be weighted out of the greys race on VRC Oaks day at Flemington.

“He’s based in Sydney so that was the barrier trial we get paid for with the way it’s panned out,” Hawkes said.

“It worked out perfect.”

Greyworm’s owner, Cathay Pacific pilot Captain Gary Lui, flew into town to watch him after missing his last-start victory at Randwick a fortnight ago.

“He was coming back from London from memory,” Hawkes said.

“But anyway he’s here in Sydney today and he’s going to appreciate the win and he’s pretty excited.”

Hawkes was planning to send him to the paddock for a spell but will now reassess his options.