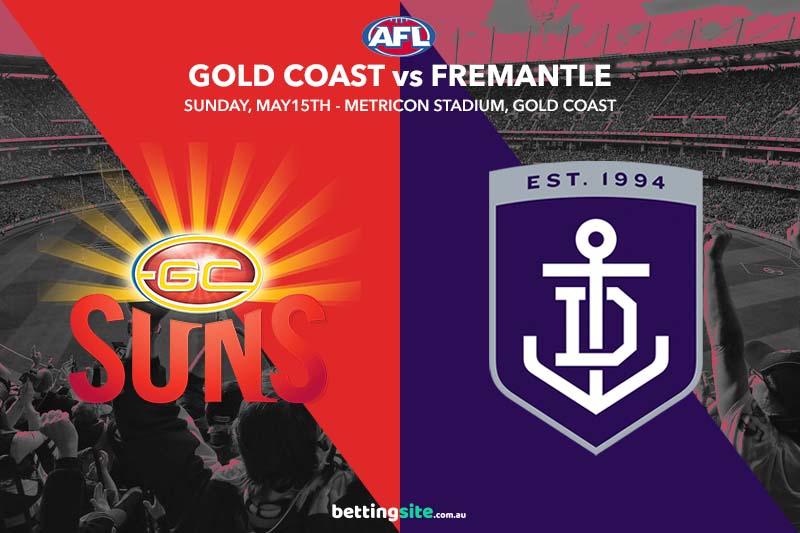 The in-form Fremantle Dockers will make their way over to Metricon Stadium this Sunday afternoon to take on the Gold Coast Suns in round nine of the AFL season.

Sitting second on the ladder with the highest percentage in the league, the Dockers have been simply phenomenal so far in 2021, which can be attributed directly to their tight defence and functioning offence.

Despite missing a handful of remarkable players each week, the Dockers keep unveiling new troops who play their role to perfection, leading to some impressive victories.

Although the Gold Coast Suns have been better than previous years, they still only have three wins from their opening eight matches, but they could build some momentum following their solid win over the Swans last week.

Stuart Dew’s Suns were fantastic in their performance against Sydney, as they smashed the Swans in the clearances and held firm in the final quarter.

A few handy players will return for the Dockers this weekend in Rory Lobb, Blake Acres and Travis Collier, while the will lose some speed as Michael Walters, Sam Switkowski and Nathan O’Driscoll have been ruled out.

The Fremantle Dockers are eager to dethrone the Demons from their position atop the AFL ladder, but they need to knock off an in-form Gold Coast before thinking about passing the reigning premiers.

Before Will Brodie reinvigorated his career with the Dockers, he was struggling to get games at the Suns due to the impressive form of Touk Miller and their other inside midfielders. Brodie is proving this season he can be just as effective as some of the Suns rovers, but it will be a huge task for him going against Miller.

Touk Miller is easily one of the best players in the AFL, as his two-way running allows him to back up his defenders and lead offensive charges up forward. Brodie is more of an inside craftsman who shovels out handballs to the better outside players, meaning his impact is not as telling as Miller, but he can still rack up plenty of disposals.

The Dockers have learnt to play on the road this season and we think they will have no trouble flying across to Metricon Stadium this time around. The Suns have beaten the Dockers the last three clashes on the Gold Coast, but we cannot see them winning this weekend while Jack Lukosius is on the sidelines and Rory Lobb returns for the Dockers.

Will Brodie to get 30+ disposals
Will Brodie has set two massive career-high disposal counts this season, notching up 37 touches against the Giants in round four and another 37 disposals against the Kangaroos last weekend. The in-form midfielder loves his new role at Fremantle and we think he will want to get some revenge against his old teammates this Sunday.

Rory Lobb adds a much-needed dimension to the Fremantle forward line, and he will have an immediate impact with a couple of goals on return. Brodie will contribute well in the middle and help the Dockers win away from home.